"In this gritty thriller, Edgar Allan Poe (John Cusack, Being John Malkovich) joins forces with a young Baltimore detective (Luke Evans, Immortals) to hunt down a mad serial killer who's using Poe's own works as the basis in a string of brutal murders. Directed by James McTeigue (V for Vendetta, Ninja Assassin), the film also stars Alice Eve (Sex and the City 2), Brendan Gleeson (In Bruges) and Oliver Jackson-Cohen (Faster). When a mother and daughter are found brutally murdered in 19th century Baltimore, Detective Emmett Fields (Luke Evans) makes a startling discovery: the crime resembles a fictional murder described in gory detail in the local newspaper--part of a collection of stories penned by struggling writer and social pariah Edgar Allan Poe. But even as Poe is questioned by police, another grisly murder occurs, also inspired by a popular Poe story. Realizing a serial killer is on the loose using Poe's writings as the backdrop for his bloody rampage, Fields enlists the author's help in stopping the attacks. But when it appears someone close to Poe may become the murderer's next victim, the stakes become even higher and the inventor of the detective story calls on his own powers of deduction to try to solve the case before it's too late."

Thanks to my friend Jan Vander Laenan. who told me about this soon to be released film.

“‘The Raven’ is a narrative poem by American writer Edgar Allan Poe, first published in January 1845. It is often noted for its musicality, stylized language, and supernatural atmosphere. It tells of a talking raven's mysterious visit to a distraught lover, tracing the man's slow descent into madness. The lover, often identified as being a student, is lamenting the loss of his love, Lenore. Sitting on a bust of Pallas, the raven seems to further instigate his distress with its constant repetition of the word "Nevermore". The poem makes use of a number of folkand classical references. 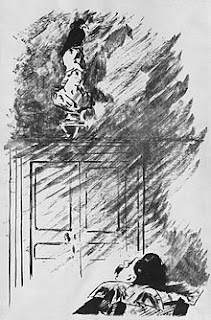 
Poe claimed to have written the poem very logically and methodically, intending to create a poem that would appeal to both critical and popular tastes, as he explained in his 1846 follow-up essay "The Philosophy of Composition". The poem was inspired in part by a talking raven in the novel Barnaby Rudge: A Tale of the Riots of 'Eighty by Charles Dickens. Poe borrows the complex rhythm and meter of Elizabeth Barrett'spoem "Lady Geraldine's Courtship", and makes use of internal rhyme as well as alliteration throughout.
"The Raven" was first attributed to Poe in print in the New York Evening Mirror on January 29, 1845. Its publication made Poe widely popular in his lifetime, although it did not bring him much financial success. Soon reprinted, parodied, and illustrated, critical opinion is divided as to the poem's status, but it nevertheless remains one of the most famous poems ever written.”
WIKI 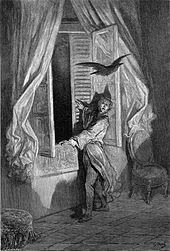 It is a poem, a lament, telling of loss, isolation, and loneliness. The opening lines identify the speaker as someone who feels tired and weak but is still awake in the middle of a gloomy night. He passes the time by reading a strange book of ancient knowledge. Poe uses alliteration to convey the effect of unsteadiness. This line also sets the poem's rhythmical pattern and provides the first example of the use of internal rhyme in "dreary" and "weary."

The speaker tells of becoming more tired and beginning to doze but being wakened by a sound that he assumes is a quiet knock. Internal rhymes of "napping," "tapping," and "rapping" along with repetition of these last two words, create a musical effect. This effect is also produced by alliteration of n. These sound devices and the steady rhythm of these lines are almost hypnotic. The Raven speaks only one word: “nevermore.” This word punctuates the poem. Each time the speaker asks a question, the strange bird repeats the word “nevermore”. 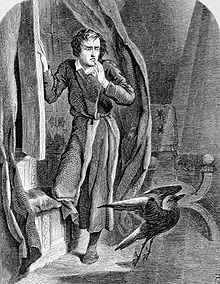 Near the end of this poem, when the fear of the poem's speaker has reached a level of near hysteria, he shouts "Leave my loneliness unbroken!" In one sense, this could just be an emotional outburst, like the lines that lead up to it, but the interesting thing about this particular line is that the speaker, in his terror, is for once reflecting upon himself. This, and the line's location at the climax of the poem, indicates to us that "my loneliness" is not just another expression that he shrieks: it is the key, the secret that he has been trying to guard all along. Throughout the poem, we see the speaker being drawn out of his isolation by the raven and the one word that it speaks. Once the bird enters his chambers, nothing really changes in the scene except the speaker's attitude, which grows
increasingly nervous. 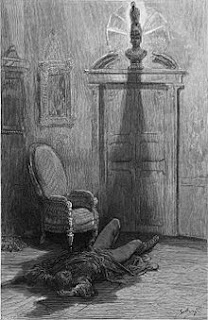 The Raven. Gustave Doré. The final lines of the poem.

I am excited by the possibilities that the film “The Raven” offers. I cannot imagine that many people viewing the film will have read Poe’s great poem. I am not being patronising: sadly, we live in a world where people do not read books, let alone the classics and poetry even less. The possibilities are that the viewer of the film, may try reading Poe’s poem and from there, turn to Poe’s body of work where there is real mystery, and a haunting despair. Poe explicitly states that he intended “the Raven” to be accessible to both the mainstream and high literary worlds.

It is unknown how long Poe worked on "The Raven"; speculation ranges from a single day to ten years.

“In part due to its dual printing, "The Raven" made Edgar Allan Poe a household name almost immediately and turned Poe into a national celebrity. Readers began to identify poem with poet, earning Poe the nickname "The Raven". The poem was soon widely reprinted, imitated, and parodied. Though it made Poe popular in his day, it did not bring him significant financial success. As he later lamented, ‘have made no money. I am as poor now as ever I was in my life – except in hope, which is by no means bankable.’

“The New World said, "Everyone reads the Poem and praises it ... justly, we think, for it seems to us full of originality and power." The Pennsylvania Inquirer reprinted it with the heading "A Beautiful Poem". Elizabeth Barrett wrote to Poe, "Your 'Raven' has produced a sensation, a fit o' horror, here in England. Some of my friends are taken by the fear of it and some by the music. I hear of persons haunted by 'Nevermore'."

“Poe's popularity resulted in invitations to recite "The Raven" and to lecture – in public and at private social gatherings. At one literary salon, a guest noted, "to hear [Poe] repeat the Raven ... is an event in one's life." It was recalled by someone who experienced it, "He would turn down the lamps till the room was almost dark, then standing in the center of the apartment he would recite ... in the most melodious of voices ... So marvelus was his power as a reader that the auditors would be afraid to draw breath lest the enchanted spell be broken.

“‘The Raven’ has influenced many modern works, including Vladimir Nabokov's Lolita in 1955, Bernard Malamud's "The Jewbird" in 1963 and Ray Bradbury's "The Parrot Who Knew Papa" in 1976. The poem is additionally referenced throughout popular culture in films, television, music and more.”
WIKI
Posted by billierosie at 04:26