Homoerotica has a long, long history. For many years gone by, a lot of women, and a lot of men too, have looked at, studied and lusted after the male form. These days we look at eroticised photographs, we surf the web, we can look at the art of Tom of Finland. In long centuries ago, eroticised paintings of the male, in Biblical and mythological scenarios, were the only images available to the viewer of the male form.

Perhaps the male form has always been fetishised -- whether the viewer has a predilection for the male erection, shoulders, groins, pectorals, abdomens, buttocks or all of the above, painters have delivered. They painted the stories that they knew, the stories that they had been told -- tales from Greek and Roman mythology and tales from the Bible.

The pleasure is for the viewer -- a male in the prime of his life -- muscles and limbs, stretched out, on display. 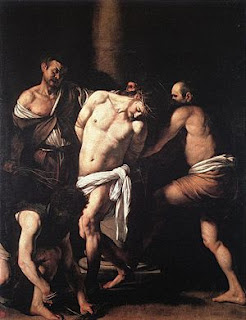 Caravaggio. The Flagellation of Our Lord Jesus Christ.


“Michelangelo Merisi da Caravaggio was the most famous painter in early 17th century Rome. His chiaroscuro work has been credited with the birth of Baroque. However, despite numerous famous works, speculation over Caravaggio's sexuality began with the commission of a few paintings for an influential Roman patron, Cardinal Francesco Maria Del Monte. Some historians see these paintings as "homoerotic" indications of Caravaggio's sexuality, while others say they merely reflect the tastes of his patron at the time. Caravaggio's short temper contributed to his short fame and life before the question of his sexuality could be answered.”
Wiki

Although no conclusive evidence of Caravaggio's sexuality has survived, derogatory accusations made by contemporaries, coupled with the aggressive representation of male eroticism in his paintings, suggest that the most original painter of early seventeenth-century Europe was actively bisexual, if not primarily homosexual.

A poet of dramatic stimulation, Caravaggio was fascinated by the intrusion of the divine into the mundane world; in canvas after canvas he used shifting planes of light and dark to fashion a moment of spiritual anagnorisis, that moment of perception that precipitates the reversal of the action in Greek drama. 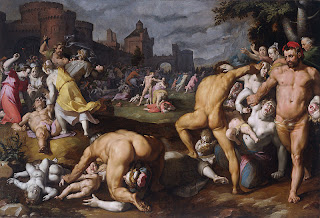 The story of the Massacre of the Innocents is found in the Bible. After the birth of Jesus, KingHerod heard that a new king of the Jews had been born in Bethlehem. Having no way to recognise the child, he ordered his soldiers to kill all the boys in Bethlehem younger than two. Meanwhile, Mary andJoseph had already fled with the baby Jesus to Egypt. They remained there until after the death of Herod. In 1590 Cornelis van Haarlem painted a blood-curdling picture of the Massacre of the Innocents. The subject had never before been tackled on so large and ambitious a scale. 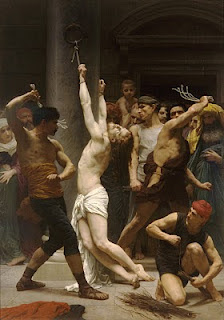 BOUGUEREAU The Flagellation of Our Lord Jesus Christ.

“To fully appreciate the art of Bouguereau one must profess a deep respect for the discipline of drawing and the craft of traditional picture-making; one must likewise submit to the mystery of illusion as one of painting's most characteristic and sublime powers. Bouguereau's vast repertory of playful and poetic images cannot help but appeal to those who are fascinated with nature's appearances and with the celebration of human sentiment frankly and unabashedly expressed.
But it remains to understand, given Bouguereau's in many ways unique style, exactly what the artist was trying to represent. Although Bouguereau has been classified by many writers as a Realist painter, because of the apparent photographic nature of his illusions, the painter otherwise has little in common with other artists belonging to the Realist movement.”


From William Bouguereau at Work, by Mark Steven Walker


“William-Adolphe Bouguereau was born in La Rochelle, France on November 30, 1825, into a family of wine and olive oil merchants. He seemed destined to join the family business but for the intervention of his uncle Eugène, a Roman Catholic priest, who taught him classical and Biblical subjects, and arranged for Bouguereau to go to high school. He showed artistic talent early on. His father was convinced by a client to send him to the École des Beaux-Arts in Bordeaux, where he won first prize in figure painting for a depiction of Saint Roch. To earn extra money, he designed labels for jams and preserves. 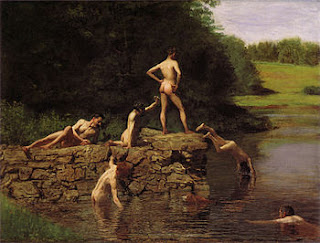 “The Swimming Hole (also known as Swimming and The Old Swimming Hole) is an 1884–85 painting by the American artist Thomas Eakins (1844–1916), Goodrich catalog #190, in the collection of the Amon Carter Museum inFort Worth, Texas. Executed in oil on canvas, it depicts six men swimming naked in a lake, and is considered a masterpiece of American painting. According to art historian Doreen Bolger it is "perhaps Eakins' most accomplished rendition of the nude figure", and has been called "the most finely designed of all his outdoor pictures". Since theRenaissance, the human body has been considered both the basis of artists' training and the most challenging subject to depict in art, and the nude was the centerpiece of Eakins' teaching program at the Pennsylvania Academy of the Fine Arts. For Eakins, this picture was an opportunity to display his mastery of the human form.

“In this work, Eakins took advantage of an exception to the generally prudish Victorian attitude to nudity: swimming naked was widely accepted, and for males was seen as normal, even in public spaces. Eakins was the first American artist to portray one of the few occasions in 19th century life when nudity was on display. The Swimming Hole develops themes raised in his earlier work, in particular his treatment of buttocks and his ambiguous treatment of the human form; in some cases it is uncertain as to whether the forms portrayed are male or female. Although the theme of male bathers was familiar in Western art, having been explored by artists from Michelangelo to Daumier, Eakins' treatment was novel in American art at the time. The Swimming Hole has been "widely cited as a prime example of homoeroticism in American art".
“In 2008, the art critic Tom Lubbock described Eakins' work as:
‘a classic of American painting. It shows a scene of healthy, manly, outdoor activity: a group of young fellows having stripped off for a dip. It is based on the swimming excursions that were enjoyed by the artist and his students. Eakins himself appears in the water at bottom right – in signature position, so to speak.’”
Wiki


“Touko Laaksonen, best known by his pseudonym Tom of Finland (8 May 1920 – 7 November 1991) was a Finnish artist notable for his stylised androerotic and fetish art and his influence on late twentieth century gay culture. He has been called the "most influential creator of gay pornographic images" by cultural historian Joseph W. Slade.

Over the course of four decades he produced some 3500 illustrations, mostly featuring men with exaggerated primary and secondary sex traits: heavily muscled torsos, limbs, and buttocks, and large penises. Tight or partially removed clothing showed off these traits, with the penis often visible as a bulge in tight trousers or prominently displayed for the viewer. His drawings frequently feature two or more men either immediately preceding or during explicit sexual activity. Nearly all of his characters were versatile and obviously enjoyed the bottom as well as the top role in sexual intercourse.”

I am unable to post any images from Tom of Finland. The images are protected by tight copyright laws. But here is a video which features much of his work.