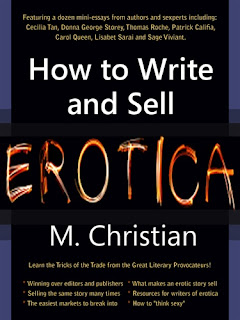 Before I say anything here's a hearty and heart-felt THANKS to Billierosie for her love and support --- and for her wanting to share this little piece I wrote about the reality of being a smut writer. Little, alas, has changed from when I wrote this -- and when it was published in “How to write and sell Erotica:” sex and sex writing is still something that seems to bring out a lot of strange things for far too many people and, until we evolve as a species, everyone who wants to say anything about eroticism needs to have a very firm grasp of what that means.


"The shock of September 11 is subsiding. Each day adds distance. Distance diminishes fear. Cautiously our lives are returning to normal. But "normal" will never be the same again. We have seen the enemy and the enemy is among us .... the publishers, producers, peddlers and purveyors of pornography."


It didn't take me long to find that quote, just a few minutes of searching. It came from an LDS Web site, Meridian Magazine, but I could have picked fifty others. Maybe it's because of the election, or because of a few horror stories that have recently come my way, but I think it's time to have a chat about what it can mean to ... well, do what we do.


We write pornography. Say it with me: por-nog-ra-phy. Not 'erotica' -- a word too many writers use to distance themselves, or even elevate themselves, from the down and dirty stuff on most adult bookstore shelves -- but smut, filth ... and so forth.


I've mentioned before how it's dangerous to draw a line in the sand, putting fellow writers on the side of 'smut' and others in 'erotica.' The Supreme Court couldn't decide where to scrawl that mark -- what chance do we have?


What good are our petty semantics when too many people would love to see us out of business, thrown in jail, or much, much worse? They don't see a bit of difference between what I write and what you write. We can sit and argue all we like over who's innocent and who's guilty until our last meals arrive, but we'll still hang together.


I think it's time to face some serious facts about what we do. 'Swinging from a rope' hyperbole aside, we face some serious risks for putting pen to paper or file to disk. I know far too many people who have been fired, stalked, threatened, had their writing used against them in divorces and child custody cases, and much worse.


People hate us. Not everyone, certainly, but even in oases like San Francisco people who write about sex can suffer tremendous difficulties. Even the most -- supposedly -- tolerant companies have a hard time with an employee who writes smut. A liberal court will still look down on a defendant who's published stories in Naughty Nurses. The religious fanatic will most certainly throw the first, second, third stone -- or as many as it takes -- at a filth peddler.


This is what we have to accept. Sure, things are better than they have been before and, if we're lucky, they will slowly progress despite the fundamentalism of the current government, but we all have to open our eyes to the ugly truths that can accompany a decision to write pornography.


What can we do? Well, aside from joining the ACLU (www.aclu.org) there isn't a lot to we can directly do to protect ourselves if the law, or Bible-wielding fanatics, break down our doors, but there are a few relatively simple techniques we can employ to be safe. Take these as you will, and keep in mind that I'm not an expert in the law, but most importantly, try to accept that what you are doing is dangerous.


Assess your risks. If you have kids, if you have a sensitive job, if you own a house, if you have touchy parents, if you live in a conservative city or state, you should be extra careful about your identity and what you are writing. Even if you think you have nothing to lose, you do -- your freedom. Many cities and states have very loose pornography laws, and all it would take is a cop, a sheriff, or a district attorney to decide you needed to be behind bars to put you there.


Hide. Yes, I think we should all be proud of what we do, what we create, but use some common sense about how easily you can be identified or found. If you have anything to lose, use a pseudonym, a post office box, never post your picture, and so forth. Women, especially, should be extra careful. I know far too many female writers who have been stalked or Internet-attacked because of what they do.


Keep your yap shut. Don't tell your bank, your boss, your accountant, your plumber, or anyone at all, what you do -- unless you know them very well. When someone asks, I say I'm a writer. If I know them better, I say I write all kinds of things -- including smut. If I know them very, very, very well then maybe I'll show them my newest book. People, it shouldn't have to be said, are very weird. Just because you like someone doesn't mean you should divulge that you just sold a story to Truckstop Transsexuals.


Remember that line we drew between 'pornography' and 'erotica'? Well, here's another. You might be straight, you might be bi, but in the eyes of those who despise pornography you are just as damned and perverted as a filthy sodomite. It makes me furious to meet a homophobic pornographer. Every strike against gay rights is another blow to your civil liberties and is a step closer to you being censored, out of a job, out of your house, or in jail. You can argue this all you want, but I've yet to see a hysterical homophobe who isn't anti-smut. For you to be anti-gay isn't just an idiotic prejudice, it's giving the forces of puritanical righteousness even more ammunition for their war -- on all of us.


I could go on, but I think I've given you enough to chew on. I believe that writing about sex is something that no one should be ashamed of, but I also think that we all need to recognize and accept that there are many out there who do not share those feelings. Write what you want, say what you believe, but do it with your eyes open. Understand the risks, accept the risks and be smart about what you do -- so you can keep working and growing as a writer for many years to come.
Posted by billierosie at 02:30