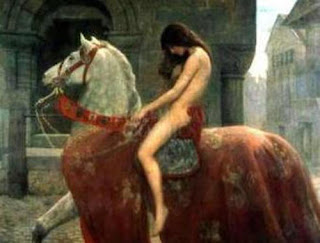 Once upon a time there was a beautiful and pious lady. Her skin was as white as snow, her golden hair hung down to her delicate ankles. Every night her maids would brush her hair until it gleamed. The beautiful lady was married to a spiteful, cruel and angry man. He was the lord of all the land and he was truly horrible. He persecuted God’s Holy Church and his judgements and laws were so harsh, that the poor people of the land scarcely had enough to eat. Each year, the spiteful, cruel and angry lord increased the taxes and the poor people were in fear that their families would starve to death. Their children were so thin and frail that they couldn’t run about and play. Their bellies swelled, they were so hungry. The mother’s milk dried up in their breasts, so that they could no longer feed their babies. All across the land you could hear the sounds of weeping mothers, children and babies. The men didn’t know what to do. They too, were weak with hunger: almost too weak to work the land and grow corn to make bread. The tools that they use to work the land were all broken anyway, and they had no money to buy new spades, shovels, ploughs and scythes. But they tried, they did their best. 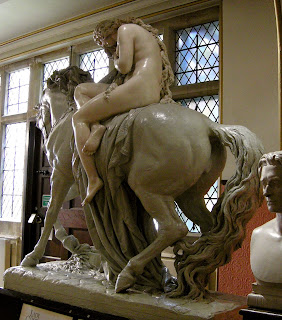 The beautiful and pious lady wept too. It broke her heart to see the people starving. At last she went to her spiteful, cruel and angry husband and asked him to lower the taxes so that the poor people could buy bread and grow corn. He refused his beautiful wife’s pleas. Still she begged him again and again. The spiteful, cruel and angry lord didn’t care about the poor people: he thought that the poor people were extremely dirty, astoundingly ugly, awfully lazy and sickeningly smelly. He always carried with him a little posy of fragrant rosemary, mint, marigold and lavender. He would hold it to his nose whenever he had to pass the stinking poor people. Everyone knew that they were carriers of disease, it was a well known fact, and they really did smell horrible. Once he threw up when he passed too close to a poor person. The stench overwhelmed his delicate nostrils. It was dreadfully embarrassing; the dirty, poor and ugly children laughed at him and threw sticks and mud. He blamed his beautiful wife, with the golden, shining hair and skin as white as snow. And his wife, the beautiful lady with the skin as white as snow and shining golden hair, continued to pester him. She went on and on and on. She wouldn’t leave him alone. At last, but only because he was absolutely and utterly totally tired, fed up, bored and thoroughly pissed off with his wife’s incessant nagging and whining, the spiteful, cruel and angry (SPA) lord said that he had a solution. He said that he would lower the taxes on the poor people, if she would remove her clothes and ride on a horse through the streets, completely naked. 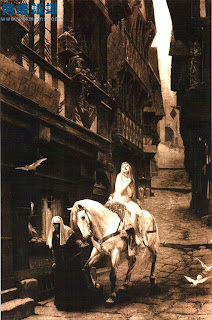 Because she was such a pious woman, demure and modest, the SPA lord didn’t think that his wife would agree to do it. But his beautiful wife took him at his word. The SPA lord, whose name was Leofric, was, quite frankly, in a bit of a panic. What would happen to his reputation if all of the common people saw his wife naked? She was very beautiful. She had large, firm, plump breasts, a full rounded belly and wonderfully smooth, white thighs. If all of the common people saw her naked, he would be a laughing stock. So he issued a decree that all of the people should board up their windows and nail them shut, so that no one would see his wife’s naked body. 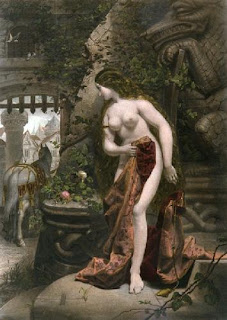 So the beautiful lady, whose name was Godiva rode naked on a beautiful white horse through the streets of Coventry, her smooth white as snow skin, covered only by her long, golden, shining hair. The streets were silent, she was unseen by the people, except for just one person, a tailor, ever after known as “Peeping Tom”, who bored a hole in his shutter, so that he might see Godiva when she passed and he could see her smooth, plump, naked body. 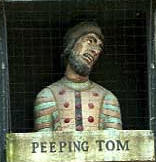 And behold, God in Heaven and all of his extremely Holy Entourage, wept at the plight of the poor people and they loved Godiva for her piety and her sacrifice. But God was angry that Tom had looked, when he’d been ordered not to. And God spake, issuing a decree that Tom should be punished. So God sent one of his trainee Avenging Angels to Tom. The trainee Avenging Angel wasn’t very good, in fact the Holy Entourage thought he was a bit of a jerk, but God had a soft spot for him. The Avenging Angel could have turned himself into a cloud of golden dust and spoken to Tom in a fearsome voice, but he had forgotten how to effect the transformation, so he simply kicked the door in, scaring poor Tom half to death. For his sinful temerity of looking at the naked Godiva, even if she was completely covered by her long, golden, shining hair -- the Angel struck Tom blind. Lord Leofric was so completely stunned by the Lady Godiva’s sacrifice, that he immediately ceased his persecution of the Church and abolished the taxes on the poor people. There was great rejoicing throughout the land and a statue of Lady Godiva, naked on her horse stands in Broadgate, in the city of Coventry in England, to this very day. And of course, Lady Godiva and Lord Leofric lived happily ever after. 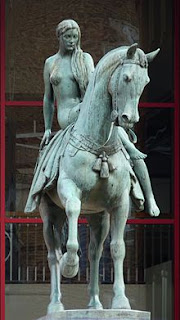 Well, well! As far as erotica is concerned, the old tale gives us templates for the Dominant and the submissive. The submissive, Godiva, is also an exhibitionist. I know it is open to question, but I wonder if “Peeping Tom” is the earliest record we have of a voyeur? If anyone knows, please let me know!

And the old tale is still told today. The Godiva Procession, a commemoration of the legendary ride instituted on May 31, 1678, as part of Coventry fair, was celebrated at intervals until 1826. From 1848 to 1887, it was revived and continues into the twenty-first century as part of the Godiva Festival.

The wooden effigy of Peeping Tom which, from 1812 until World War II, looked out on the world from a hotel at the northwest corner of Hertford Street, Coventry, can now be found in Cathedral Lanes Shopping Centre. Nearby, in the 1950s rebuilt Broadgate, an animated Peeping Tom watches over Lady Godiva as she makes her hourly ride around the Godiva Clock.

Is the old, old tale true? Well it seems a matter of debate amongst historians. There certainly was a Lord Leofric, who was married to Lady Godiva. Contrary to the legend, both Godiva and Leofric were generous benefactors to the Church and to the poor.

“Lady Godiva was the wife of Leofric (968–1057), Earl of Mercia. Her name occurs in charters and the Doomsday survey, though the spelling varies. The Old English name Godgifu or Godgyfu meant "gift of God"; Godiva was the Latinised version. Since the name was a popular one, there are contemporaries of the same name.


If she is the same Godgifu who appears in the chronicles of Ely, Liber Eliensis (end of twelfth century), she was a widow when Leofric married her. Both Leofric and Godiva were generous benefactors to religious houses. In 1043 Leofric founded and endowed a Benedictine monastery at Coventry. Writing in the twelfth century, Roger of Wendover credits Godiva as the persuasive force behind this act. In the 1050s, her name is coupled with that of her husband on a grant of land to the monastery of Saint Mary, Worcester and the endowment of the minster at Stow Saint Mary, Lincolnshire. She and her husband are commemorated as benefactors of other monasteries at Leominster, Chester, Much Wenlock and Evesham.


After Leofric's death in 1057, his widow lived on until sometime beyond the Norman Conquest of 1066. She is mentioned in the Doomsday survey as one of the few Anglo-Saxons and the only woman to remain a major landholder shortly after the conquest. By the time of this great survey in 1086, Godiva had died, but her former lands are listed, although now held by others. Thus, Godiva apparently died between 1066 and 1086.


The place where Godiva was buried has been a matter of debate. According to the Evesham Chronicle, she was buried at the Church of the Blessed Trinity at Evesham, which is no longer standing. But, according to the authoritative account in the Oxford Dictionary of National Biography, "There is no reason to doubt that she was buried with her husband at Coventry, despite the assertion of the Evesham chronicle that she lay in Holy Trinity, Evesham."
William Dugdale (1656) states that a window with representations of Leofric and Godiva was placed in Trinity Church, in Coventry, about the time of Richard II.”

From the New World Encyclopaedia.


“Archaeologists in Coventry have unearthed part of a 14th century stained glass window bearing the face of a beautiful woman. It is thought to be that of Lady Godiva, famous for riding naked through the streets of the city.

The face on the newly-found glass shards is beautiful and crowned by wavy, golden hair. It was part of the east window of the former cathedral where, traditionally, the images of benefactors are depicted.”