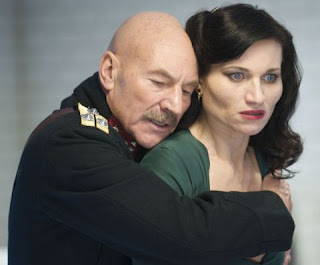 It’s been a long time since I saw a production of William Shakespeare’s “Macbeth”. That was back sometime in the 1980’s, at the Royal Shakespeare Company, in Stratford-upon-Avon. Jonathan Pryce was Macbeth and Sinaed Cusak was his Lady. But even though it’s some 25 years since I saw the play, I hadn’t forgotten about the profound effect it had on me then, and still has now. Last night I watched the film version of Rupert Goold's production on television. If anyone missed it, you can probably watch it on BBC I Player -- but only if you live in the U.K.

So, yes Macbeth still effects me, and infects me. I turned off the T.V. last night feeling just a little grubby, as if I had been a party to something indecent, sacrilegious, obscene, as if I, like the characters had blood on my hands. Yes, there's something about the Scottish play that I find really gripping and horrible, but fascinating at the same time.

Rupert Goold's production of “Macbeth” was filmed on location at Welbeck Abbey, Nottinghamshire, and is set in an undefined and ominous country. The hauntingly atmospheric film offers a very 21st century allegory of war and the quest for power; it’s a dramatic and enthralling recreation of Shakespeare's claustrophobic and bloody tragedy.

Goold brings the action forward and the setting is a never identified central European country where things are on the verge of collapse. The production was filmed in the environs of the underground tunnels and rooms beneath Welbeck Abbey which gives the whole thing an air of intensity and unpredictability.


“Patrick Stewart and Kate Fleetwood, Macbeth and Lady Macbeth prepare for regicide.
Via the Chichester Festival and acclaimed runs on Broadway and in the West End, director Rupert Goold's Macbeth has made a sizzling transition to television. Set in an anarchic, war-torn Scotland and suffused with imagery of murder, torture and Stalin-style purges, it placed Patrick Stewart's thunderous central performance in a spinning black hole of evil, into which he is remorselessly sucked as the action develops.

We see Macbeth steadily torn apart by a maelstrom of ambition, conscience and destiny, the latter revealed in regular bulletins from the flesh-crawlingly sinister Three Witches. Nonetheless, even as torrents of spurting blood began to surge through the action like a Tsunami, Stewart never quite lets us lose sight of the brave and honourable qualities that once seemed to mark out Macbeth as a true leader, rather than a natural born killer.”

The play’s supernatural overtones make it particularly well suited to drawing out interiorised themes of damnation and delusion. Apart from some battle scenes and crumbly newsreel footage of Soviet armies marching through Red Square, the action is mostly located in a network of claustrophobic white-tiled bunkers and tunnels, which could have been an abattoir or a Victorian lunatic asylum. The scene is set with a maimed and bloody soldier being wheeled past on a gurney, just able to gasp out news from the battlefield, as the witches materialise as nurses in a hospital for combat casualties. However, rather than acting as angels of mercy, they briskly euthanise the wounded man and then rip out his heart for their ghastly black-magic rituals. The "hubble, bubble" scene was delivered as a mutated rap, with an electronic soundtrack and jerky, processed video.”

“Three hundred years prior to Sigmund Freud, William Shakespeare wrote Macbeth , a tragic tale of where one’s unchecked and unadulterated desires can lead to. Lady Macbeth acts as a sophisticated Freudian id to Macbeth’s ego, taking action to reach her aims, with no understanding of the true ramifications of her immorality.

The concept of being the queen, and the immediate pleasure associated with it, turns Lady Macbeth into an uninhibited id, seeking only to achieve the crown with little care for the consequences. To accomplish this, she has to prepare herself; she needs to be strong, wilful, and manipulative, so that she can incite Macbeth into killing King Duncan. Lady Macbeth first appears in the play after receiving a letter from her husband detailing the witch's prophesies. There is little doubt in Lady Macbeth's mind that her husband will be King:

“Glamis thou art, and Cawdor, and shall be / What thought art promised” She is keenly aware of Macbeth's weaknesses, that he is;

and though he doesn't lack the ambition, he lacks;

“the illness should attend it”.

Macbeth possesses courage, compassion, loyalty to the crown, and other traits that are not befitting a man that must take matters into his own hands. Lady Macbeth must, in essence, become the man of action. To do so she calls upon evil spirits to aid her:

“Come, you spirits
That tend on mortal thoughts, unsex me here,
And fill me from the crown to the toe top-full
Of direst cruelty.”

It is absolutely essential for her to be barren of female qualities – no compassion, no kindness, and no pity. She needs to attain a level of intense cruelty, eliminating all traces of womanhood, especially since Macbeth has some of those traits already.”


Kate Fleetwood plays Lady Macbeth with a psychopathic intensity. Without her Macbeth’s actions would have remained as an unfulfilled dream. She is the motivating force behind the tragic drama. It is through her that the seed germinates into a monster.

Macbeth contains some of Shakespeare’s most vivid female characters. Lady Macbeth and the three witches are extremely wicked, but they are also stronger and more imposing than the men around them. It is the sinister witches that cast the mood for the entire play.

Shakespeare has the witches speak in language of contradiction. Their famous line;

“Fair is foul, and foul is fair,” is a prominent example, but there are many others, such as their characterization of Banquo as;

“lesser than Macbeth, and greater”.

Such speech adds to the play’s sense of moral confusion by implying that nothing is quite what it seems. Interestingly, Macbeth’s first line in the play is;

“So foul and fair a day I have not seen”. This line echoes the witches’ words and establishes a connection between them and Macbeth. It also suggests that Macbeth is the focus of the drama’s moral confusion.

“This production has suggestions of Hitler in his bunker, surrounded by trembling sycophants. But it is in his heart-of-darkness relationship with Lady Macbeth (Kate Fleetwood), her raven-black hair and harshly lit facial features these are elemental signs which emphasise her implacable willpower and ambition on Macbeth's behalf. However, while it is her tragedy to be devoured by the guilt which drives her to suicide, Macbeth finally appears liberated by the chance to revert to his warrior self and fight to the death.

Duncan is given the first word in this television version acclaimed production of Macbeth, not – as is more conventional – the witches.

We are given martial music, archive footage of Katyusha rockets and T-34 tanks, a close up of a clutching hand and then;

"What bloody man is that?"

as the king advances down the corridor of a chaotic front-line clearing station towards the stretchered figure of the Sergeant, that helpfully, garrulous casualty who brings us up to date with Macbeth's valour. And, if, on seeing this production of Shakespeare’s play you grumble at this point about Goold's peremptory excision of the supernatural in favour of applied historical concept, you probably won’t be grumbling for long.”
Posted by billierosie at 07:03