From Wikipedia, the free encyclopaedia. 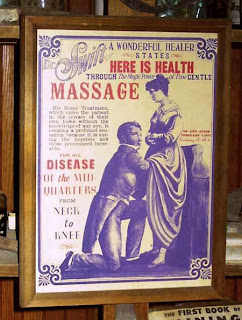 Female hysteria was a once-common medical diagnosis, made exclusively in women, which is today no longer recognized by modern medical authorities as a medical disorder. Its diagnosis and treatment were routine for many hundreds of years in Western Europe. Hysteria was widely discussed in the medical literature of the Victorian era. Women considered to be suffering from it exhibited a wide array of symptoms including faintness, nervousness, insomnia, fluid retention, heaviness in abdomen, muscle spasm, shortness of breath, irritability, loss of appetite for food or sex, and "a tendency to cause trouble".
Since ancient times women considered to be suffering from hysteria would sometimes undergo "pelvic massage" — manual stimulation of the genitals by the doctor until the patient experienced "hysterical paroxysm" (orgasm).

Water massages as a treatment for hysteria c. 1860.


The history of the notion of hysteria can be traced to ancient times; in ancient Greece it was described in the gynaecological treatises of the Hippocratic corpus, which date from the 5th and 4th centuries BCE. Plato's dialogue Timaeus tells of the uterus wandering throughout a woman’s body, strangling the victim as it reaches the chest and causing disease. This theory is the source of the name, which stems from the Greek cognate of uterus, hysteria (ὑστέρα).

It was thought to be caused by sexual deprivation in particularly passionate women: hysteria was noted quite often in virgins, nuns, widows and, occasionally, married women. The prescription in medieval and renaissance medicine was intercourse if married, marriage if single, or vaginal massage (pelvic massage) by a midwife as a last recourse. 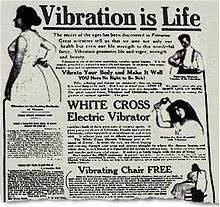 A physician in 1859 claimed that a quarter of all women suffered from hysteria. One physician catalogued 75 pages of possible symptoms of hysteria and called the list incomplete; almost any ailment could fit the diagnosis. Physicians thought that the stresses associated with modern life caused civilized women to be both more susceptible to nervous disorders and to develop faulty reproductive tracts. In America, such disorders in women reaffirmed that the United States was on par with Europe; one American physician expressed pleasure that the country was ”catching up” to Europe in the prevalence of hysteria.

Rachel P. Maines has observed that such cases were quite profitable for physicians, since the patients were at no risk of death, but needed constant treatment. The only problem was that physicians did not enjoy the tedious task of vaginal massage (generally referred to as 'pelvic massage'): The technique was difficult for a physician to master and could take hours to achieve "hysterical paroxysm." Referral to midwives, which had been common practice, meant a loss of business for the physician. 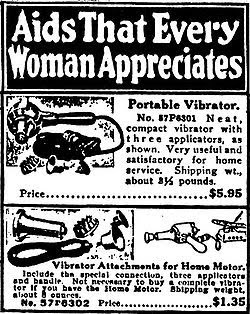 A 1918 Sears, Roebuck and Co. ad with several models of vibrators.

Over the course of the early 20th century, the number of diagnoses of female hysteria sharply declined, and today it is no longer a recognized illness. Many reasons are behind its decline: many medical authors claim that the decline is due to laypeople gaining a greater understanding of the psychology behind conversion disorders such as hysteria, and it therefore no longer gets the desired response from society.

Thanks to Jan Vander Laenen for telling me about the uterus/hysteria connection.

I shall be posting this on Frequently Felt.
Posted by billierosie at 06:29