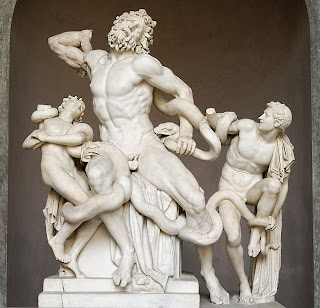 There’s something strangely alluring about the sight of a strong man in ropes and chains, struggling to be free of his bonds. Well, I think so, anyway. All that muscle, straining. His sweat making the bonds slippery, ever tighter. The struggle is hopeless; he sees defeat staring him in the face and still he is spirited enough to fight on.

Laocoon  and his sons are bound and helpless by fierce serpents. There’s a statue of Laocoon in his death throes, in the Vatican in Rome. Pliny attributes it to three Rhodian sculptures, Agesander, Athenodoros and Polydorus.

Punishment through bondage, for a sin, real or imagined and often trivial, is the catalyst for many modern bondage stories. A slave forgets to collect his master’s dry cleaning, and is tied to a whipping bar; he is helpless and is whipped. The whipping is secondary; it is the fact that he is bound and helpless, that is the important part of the ritual. In another story, a submissive craves his punishment and will contrive to get it by inventing any misdemeanour. He visits his Mistress in his lunch break and is forced to return to his office, wearing a cock cage beneath his pants. The cage is screwed tightly, pressing painfully against his balls, yet still his cock struggles valiantly for an erection that just cannot happen.


The old stories are even in the Bible. Delilah contrives to discover the secret of Samson’s great strength. This is a man so strong and powerful, he has ripped a lion in two. Eventually, he tells her. His strength is because of his long hair. Delilah tells Samson’s secret to the Philistines, and Samson is shorn of his locks while he sleeps. His strength is gone and Samson is bound and chained. His eyes are put out and Delilah pockets the silver that the Philistines have paid her.

The eroticism, the beauty of bondage, whether in art, or literature give us our images, our stories, our fantasies.

Strength and power are contained, controlled and relinquished. There is beauty in their bonds. The victims suffer in their strength.

This blog post was compiled using sources from the web.