Patiently at Her Feet 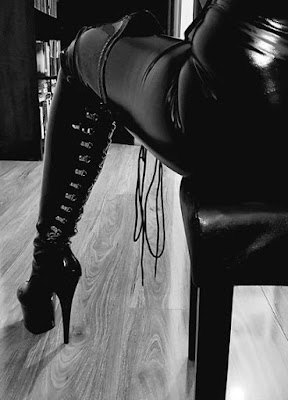 I read "Enslaving Eli", admittedly some time ago now; it really hit a resonance with me, and it still does. Much "erotica" is simply centred about sex, but good erotica involves the reader, and gives the reader something to think about. Enslaving Eli does just that, what drives his submission, what drives his decisions? When does his submission, willingly given, become binding, the control he gives up become absolute? He willingly enters the wonderful Coterie, never to leave. As a submissive, I’ve moved some way along this journey, but certainly not all the way, but could I, would I?

Yes, I`m a male submissive, and proud of it. My submission makes me feel strong, and safe. I have no sexual agenda, I seek only to fully give control to another, to be used and cared for by another, to please and be useful to another. It is very difficult to put that submission feeling into words, and just as difficult to predict how far it might take me, but we can try.

To be in the presence of a truly dominant woman is an "electric" feeling. To kneel at the feet of a dominant woman generates an exquisite wave of submission; not something lost, but something gained. I feel strong, focused and "safe", it`s like entering another world, one in which only your dominant is important, and where consequently your worries simply disappear. It`s a very subservient and incredibly compliant situation; focused only on the dominant, her instructions are unquestioned, binding, there to be followed. While the reasoning behind this submission may be complex, the effects are simple. I feel refreshed, at ease, everything becomes so simple, only one thing to do, to serve. That exquisite feeling of submission is "addictive", it taps into something very natural, and you need it again, and why wouldn`t you!

Eli`s first meeting may have been both sexually and submissively driven, but his submissive drive quickly takes over; it`s almost inevitable. A submissive will quickly ascertain whether he/she is in the presence of a dominant, and vice versa; put the two together and the result can be predictable. If that submissive wave manifests itself, then he will crave more, will need confirmation, and if She accepts, then the journey will begin. He`ll want to be controlled, to be pushed, tested and abused, in order to prove himself to her; he becomes "obsessed" with her, focused only on her, focused on her dominance and control. I understand that, I feel that, I`m on that journey, but unlike Eli, my journey will be more truncated.

Why the need to be tested and abused? For myself it is an essential element of the Domme-sub relationship. It can take many forms, infliction of pain, humiliation, deprivation, to name just some. Let me say immediately, I am not a masochist; the situation with a masochist is, in my opinion, very different. A masochist seeks pain; it is a battle within himself to take more pain. Myself, I hate pain, but it is a hugely important part of forging that connection with your dominant. I get through the pain by acutely focusing on the dominant, trusting and respecting her; she has complete control and can do what she wants, and through those actions the connection of Domme with sub is built and strengthened. Through those actions my submission is heightened, and my position with regard to the Domme is exemplified. On the one side I feel strong and safe in her presence, on the other she can inflict pain and discomfort, such a beautiful dilemma!

Let`s imagine I`m a free agent, no ties, no relationships, would I, as Eli does, take the journey further to its conclusion? I love the idea of the Coterie, a Female led supremacy; as a submissive I`m fascinated with such ideas, but they are just fantasy. I value my intelligence and independence, more so than my submission; to be absolutely enslaved, would I not just become a docile pet, mentally subdued and altered? I think the answer is clearly No, I could not take that journey to it`s conclusion. There has to be a balance established. What is much more feasible is a Female led Relationship, that`s something I would certainly aspire to!

Some of my thoughts, in part inspired by "Enslaving Eli", it`s what good erotica should do. I've discovered my submissiveness, and I embrace it; let yours out and experience the release!

Enslaving Eli is available at Amazon US and Amazon UK