THE NIGHTMARE...A weird horse, an even weirder goblin and a beautiful sleeping beauty..what is there to be afraid of? 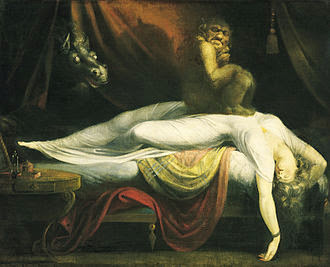 We’re all familiar with Henry Fuseli’s painting, “The Nightmare”. The feelings of stress and anxiety that the image evokes. Freud would consider this work as an example of “the uncanny.” The “unheimlich,” the unfriendly world of the shrieking horror of our unconscious. In our unconscious dwells the taboo; those dark secret yearnings of our worst nightmares. “The hag ridden realm of the unconscious.”


I’m still learning about Jung, but I think he would say that this painting is an example of an ancient story; a mythology. A piece of our collective unconscious. A story that is whispered, by candlelight, while snow falls softly outside. Jung would also talk about “the shadow.” For our emotional sanity, we must acknowledge the shadow. Recognise that we do have indecencies, the taboo, in our psyche. Only then can we live healthy, sane lives. We shun the taboo, yet are drawn to it. It fascinates us, in the same way that we cannot turn away from Fuseli’s “Nightmare.”


Fuseli painted the picture in 1781. He produced at least three other versions of “The Nightmare.”


But what is our place in this painting? We are the voyeur, gazing in horror at the potential violation of this beautiful young woman. We anticipate the violation hungrily, at the same time screaming our denial. There is the stench of sulphur, the ghastly shriek of tortured demons. Why does Fuseli want to show us this depravity? Is he telling us that he knows our darkest, deepest secrets? Is he telling us about his own contaminated desires? Why does Fuseli want us here?


Whatever Fuseli’s reason, his painting is an image to haunt our waking hours. To make us afraid of sleep. To dread our dreams. The sinister creak on the stairs, the screams of hell, echoing down through eternity. It is Fuseli’s “Nightmare.”


Contemporary critics often found the work scandalous due to its sexual themes. A few years before he painted “The Nightmare,” Fuseli had fallen passionately in love with a woman named Anna Landholdt in Zürich. Landholdt was the niece of his friend, the Swiss physiognomist Johann Kaspar Lavater. Fuseli wrote of his fantasies to Lavater in 1779:


“Last night I had her in bed with me—tossed my bedclothes hugger-mugger—wound my hot and tight-clasped hands about her—fused her body and soul together with my own—poured into her my spirit, breath and strength. Anyone who touches her now commits adultery and incest! She is mine, and I am hers. And have her I will.…”


Fuseli’s painting, likely influenced Mary Shelley. Shelley would have been familiar with the painting; her parents, Mary Wollstonecraft and William Godwin, knew Fuseli well. In a scene from her Gothic novel Frankenstein, (1818), where the creature has murdered Victor’s wife, Shelley seems to draw from Fuseli’s canvas:


"She was there, lifeless and inanimate, thrown across the bed, her head hanging down, and her pale and distorted features half covered by hair."


The novel and Fuseli's biography share a parallel theme: just as Fuseli's incubus is infused with the artist's emotions in seeing Landholdt marry another man, Shelley's monster promises to get revenge on Victor on the night of his wedding. Like Frankenstein's monster, Fuseli's demon symbolically seeks to forestall a marriage.
Fuseli is often quoted as saying, "One of the most unexplored regions of art are dreams".


"Can a picture be scary, like a film? You might think not, for a simple reason. What makes a movie scary is not the subject alone, but the timing. You need sequence, you need editing, to create suspense and shock, the horrible realisation, the sudden jolt. And this a picture cannot do - because a picture (so one old theory goes) is all taken in at a glance, in a single blink."


Of course, this is sort of true. Looking at a picture is not like watching a film or turning the pages of a book. You grasp what's going on quite quickly (well, depending on what you notice). A whodunit in paint would be hard to do. But in another way, the glance theory is quite wrong. The eye sees a picture, not in a blink, but in a series of fixations that dart and scatter across its surface.


But the "timing" of a picture - that's something else again. Even though the scene is all before you, a picture can pace and direct your attention. Though it lacks the syntax of a strip cartoon, it can create episodes and sequence and surprises. The sequence may not correspond to literal eye-fixations. (Words on a page have an order, after all, but the eye darts all over the page as it reads). It's a matter of managing the viewer's interest.


To see a pictorial edit at work, take that classic scary picture, Henry Fuseli's “The Nightmare.” The voluptuously flopped sleeping woman is visited in her dreams by a revolting incubus and a frightening horse. All very Gothic, Freudian etc. But put psychology to one side, and look at stage-management.


Look at the picture, and watch how you look at it. It may seem upfront enough, with its three prominent characters, a woman and a couple of creatures. And it's true that these elements are clear(ish) in your field of vision. But you don't attend to them all at once. Fuseli controls your involvement.


“The Nightmare,” is not a fluent, unfolding composition, where one thing leads smoothly to another. It's made up of separate incidents, each requiring a distinct act of attention. Move between them, and attention jumps. What's more, these incidents have an order. The picture arranges things so that you move and jump in sequence. This still image is cunningly and abruptly edited.


The brightest patch is the woman's bust, her breasts, shoulder, throat, cheek, closed eyes, the unconscious mind in the helpless and exposed body. This is the first "shot" in the edit. It is not simply eroticism. It uses eroticism to manage the viewer's attention, and it won't just be the eyes of the male viewer that are immediately drawn to this area. Sexy female vulnerability, with a spotlight on it, is a general hot grab. That's where Fuseli begins his sequence. Though far from the centre, it is the picture's hub, the point from which everything else is paced.


This hub, you notice, is not the whole woman, just a part. The woman's body is itself delivered in shots. The bust is one incident. The left forearm and the flaccid hand, trailing its fingers on the floor, are another. (There's a clear jump of attention as you look between them: this - that.) And the rest of her, the tapering mermaid's tail curve, ending in a single toe-point, is a third shot, another jump. This fragmenting of the passive figure is not only fetishism. It's editing. You the viewer have to put this distrait body together from its parts. It makes it all the more passive, less in control of itself.


And then, the monster! - the devilish hunched incubus, that squats on the woman's belly. The jump juxtaposition is obvious here: compact brown lump set upon stretched-out, languid white curve. There's an extra scari-ness in the way this figure lurks. Its lower half is shadowy and formless, blending into the gloom behind, not really anything. Its hideous shape and nature only come to light, materialise, as you go up, with a gradual realisation.


What adds to the fear, when you see what the creature is, is that it isn't actually doing anything to her. It's just sitting on her, inert, like a monkey-ornament. It's not performing a horrible act. It has some calm and horrible purpose, which is worse. And it turns its bulging eyes to meet the viewer's in a way that shows a mind at work, and may invite complicity.


But as this horror is sinking in, the scene's big shock effect strikes: on the far left the crazy nightmare horse, flash-lit, eyes burning, hair standing on end, barges into the picture out of the darkness, out of nowhere, out of control. It enters suddenly, and Fuseli depicts it like something that is seen suddenly, its form not fully grasped. He paints a Francis Bacon creature, in elusive, flickering highlights and blurs that don't integrate into a single solid. It is hysteria and suddenness embodied. Without its white-hot eyeballs, the horse would hardly read as "head" at all.


The scene carefully paces its horrors. It is made of shots and jumps, gradual realisations, sudden shocks. It is thoroughly and dramatically timed. True, the editing of a picture is always more flexible than the frame-sequence of a cartoon strip or the cuts of a film. You can always go back, you can move between things in other sequences, every part can be related to every other. You can do your own edit. But still, a scene such as The Nightmare, emphatically divided into its distinct and horrid incidents, puts a potential scare into your every move.
Posted by billierosie at 04:39