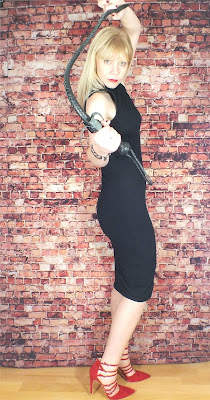 I suppose you could say I fell into the scene. I had always felt like a round peg in a square hole, never quite fitting the mould, and the day I stepped inside a Dominatrix's converted house I knew I had found something that made my heart race and my blood pump to every corner of my being. I had never thought of myself as being dominant or 'into' fetish, I would admit to bossy (controversial word but I believe I am), and confident, but dominant was not a word I was au fait with. So, how did I get to be in that house?

Believe it or not I was a rather quiet child at school, always had my head in the books, a good student. At home was another matter altogether.  I am the oldest sibling and didn't I know it! Some of my earliest memories are of organising school role play games with the local group of children I grew up with. I was always the teacher, up at the blackboard, giving my orders. Childhood games of 'house’ and ‘mummies and daddies ' were always dictated and led by me. I even convinced two of the local boys to be part of a dance group, one of whom I am still close friends with to this day. He recounts the story regularly of the time when I had them dancing to Abba songs, much to his disgust! My teenage years were angst filled, as many teenagers’ years are. I was diagnosed as an insulin dependent diabetic at 12 years old and had to grow up and become independent and responsible overnight. This set me apart from my peers as they could gallivant off at a moments notice whereas I had to take bags full of medical kit and food. It was at this point that I think I felt a separation from the 'norm'.

I am asked regularly as to whether I had fetish inklings during my youth. I’m not sure, is the answer to that. Was I different? Yes. Was I drawn toward fetish immediately? Yes, once I found it. One incident I recall vividly was seeing The Rocky Horror Show film for the first time. I must have been about 11 or 12 years old. I was intrigued, (border line obsessed), with Tim Curry as Frankinfurter in his underwear and make up. I recall the film doing strange things to my insides and wondering what on earth was going on with me. Was I born to fancy men in frilly knickers? :-)
Time passed, I grew up, I experimented, and I lived. Some of my early ‘experimentation’ did include fetish play and I did frequent both swinging and fetish clubs during this period, building up an interesting group of friends. It was whilst attending a New Years Eve party, with said group of friends, that I met my first ever Pro Dominatrix. She was full of energy, verve, passion and had a wicked sense of fun. I was spellbound by her. Her authoritativeness, her way with others and her charismatic personality all meant her presence lit up the room.  We ended up in deep conversation and we realised we had a lot in common. By New Year's Day she had invited me to her 'dungeon', I accepted her invite and the rest just fell into place. I quit my job – teaching, and I committed to a new future, not being totally sure of what that future actually held. It was mad, irrational and one of the best bloody decisions I had made in my life up to that point. That's how I ended up in that converted 2 up, 2 down house.

The Domme of the house took me under her wing and taught me the intricacies of domination. I do not believe that you can teach a person to be naturally dominant, it is either there or it isn't, however a person has to learn the art and skills of domination. I was intrigued by the raw power of CP, the delicacy of sensual play, the potency of bondage, the raucousness and entertainment of and from humiliation, the joy of the extensive range of outfits and shoes/boots, (I could go on and on). And then there was the control, that huge, ever present feeling of complete control. It swept me off my feet. I got to meet a multitude people, both Domme and sub, all with wonderful life stories and amazing 'journeys.' The subs were men whose interests are labelled in the vanilla world as 'weird' and 'sick' and there I was chatting to them. I enjoyed their company and soaked up their unique stories and tales as to how they got in to finding and exploring their submissive sides and interests. One in particular, a maid slave, had a big impact on me. He/she was present at the dungeon a lot and she was often my guinea pig. I remember a full afternoon spent with the violet wand and electrics box with me 'experimenting' on her with lots of jumping and screeching (on her part) and lots of giggling (on my part). She was very particular about her dressing too. She taught me that for some people the dressing, make up and full presentation has to be precise. She was quite the perfectionist when it came to outfits, matching her underwear and accessories. She had to be presentable at all times because punishment reigned if she was not. The dominants I met were from all walks of life, some pro, some played socially, a Master whose forte was rope bondage.

I was discovering myself and my kink, which was hidden under layers of social conditioning. I was growing and developing at a pace. The Dominatrix that gave her time to train me became a friend, a partner in crime, we played good cop, bad cop. We were light and shade and all was well. Every day I would go to her dungeon to learn and experience. Every single day I witnessed new interests, new activities and I was hooked. When the time came for her dungeon to close, we parted company, I was ready to spread my wings and fly alone in my own setting. She retired not long after. Many Domme's seem to burn out and disappear from the scene as quickly as a candle is blown out in a draught. Obviously, there are many colourful and varied reasons for a Domme's retirement, they range from ill health to personal problems to their dungeons being targeted by local gossips and 'do gooders'. Many seem to simply tire of the 'role' and the pretence and they become unable to face putting on the make-up and the clothing and transforming themselves into their chosen persona. I am hoping to completely avoid this particular hurdle as I am as true to myself as I can be. I am not an actress that plays a part. Angelica is me, she’s not an alien invader, she has lived and breathed within me since the day I was born.

My beliefs and ways of playing are ever growing and changing. I truly enjoy what I do. When a submissive approaches me I listen to and respect their interests and then I create a session that works for me rather than kowtowing to anyone’s specific fetishes. I train all of my submissives to accept. Acceptance of my decisions, instructions and choices takes time to train into a submissive. I enjoy this time of getting to know a person inside/out. It can take years for me to fully train a submissive as I want them. There is no rush, time is forever on my side in my studio. I want to end a session knowing that I have taken what I wanted from the session and knowing the sub in my presence has been truly dominated/controlled by me. Topping from the bottom is a pet hate of mine. I do
understand that people have core interests and will ensure that I find out about these, those are their 'weaknesses' in play. They will be the things they look forward to, enjoy, fantasise about and that can be a potent part of a session but they have to understand that I, their Mistress, also has interests and in order to keep me entertained they have to be open and accept my play, my interests, my mood and my wants and needs.