For the younger generation there is nothing so entertaining as shocking their parents and grandparents. This, they always do with a flourish; if they get a reaction, that is wonderful and is definitely worth the effort. In the years of George, the Prince Regent’s rule over London’s fashionable elite, the younger generation, shocked the older generation in a bold, extravagant gesture, with a brand new dance; the Waltz.

The year was 1815, the ending of the time of the Napoleonic wars. The government, led by Lord Liverpool, negotiated a peace settlement. The king had nothing to do with the details. Poor King George III had descended into madness and George, his son, the Prince Regent was too intent on going to licentious parties and generally having a pretty wild time, to be bothered with the politics of foreign policy.

Within the rural and urban counties of England, there was a mood of social and economic malaise, yet the Prince Regent and his entourage of the young aristocracy, exuded a mood of confidence, exuberance and expectation. There was an explosion of outrageously expensive design on an unprecedented scale. New styles were embraced. And then there was this decadent new dance craze.

The Waltz was a couples dance, as opposed to the traditional group dances. The gentleman actually clasped his arm around the lady's waist, giving the dance a dubious moral status. The Waltz was a dance born in the suburbs of Vienna and in the alpine region of Austria. It was foreign, that in itself was enough for the parents of the young, English  aristocracy to view it with suspicion.

The shock of the new. Each generation thinks that they are the originators of this phenomenon, but it has been done so many times before. 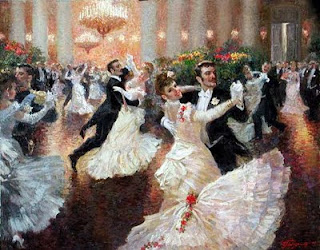 Before the scandalous Waltz came along, dancing had been civilised. You danced in large groups, only occasionally touching each other. Flirting would be done with eye contact. In the Waltz, you held your partner in an embrace for a whole dance. Touching, whispering to each other; social rules were broken. A strong arm around a slender waist. Long, delicate fingers cling to a firm shoulder. Warm rounded flesh beneath fine, creamy lace, or translucent muslin. White thighs pushed apart with an insistent, probing knee. Breasts, yearning for urgent caresses, crushed against a broad chest. Waltzing was dirty dancing for the Regency teens. The impact of the Waltz would probably have had the same effect on the older generation, as any sweet grandmother today stumbling into a full on swingers party.


The waltz was criticized on moral grounds by those opposed to its closer hold and rapid turning movements. Religious leaders almost unanimously regarded it as vulgar and sinful. Continental court circles held out obstinately against the waltz, seeing depravity in every swaying, graceful move.

In July of 1816, the waltz was included in a ball given in London by the Prince Regent. A blistering editorial in The Times a few days later stated:"We remarked with pain that the indecent foreign dance called the Waltz was introduced (we believe for the first time) at the English court on Friday last ... it is quite sufficient to cast one's eyes on the voluptuous intertwining of the limbs and close compressure on the bodies in their dance, to see that it is indeed far removed from the modest reserve which has hitherto been considered distinctive of English females. So long as this obscene display was confined to prostitutes and adulteresses, we did not think it deserving of notice; but now that it is attempted to be forced on the respectable classes of society by the civil examples of their superiors, we feel it a duty to warn every parent against exposing his daughter to so fatal a contagion."  (Source: The Times of London, 16th July 1816) 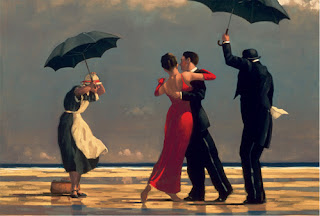 Even as late as 1866 an article in the English magazine Belgravia stated: "We who go forth of nights and see without the slightest discomposure our sister and our wife seized on by a strange man and subjected to violent embraces and canterings round a small-sized apartment - the only apparent excuse for such treatment being that is done to the sound of music - can scarcely realize the horror which greeted the introduction of this wicked dance."

Reportedly, the first time the waltz was danced in the United States was in Boston in 1834. Lorenzo Papanti, a Boston dancing master, gave an exhibition in Mrs. Otis' Beacon Hill mansion. Social leaders were aghast at what they called "an indecorous exhibition."

I thought that the 1960’s generation made a pretty good case for shocking the older generation. It seems that they had nothing on those wilful teens of Regency England.
Posted by billierosie at 03:38