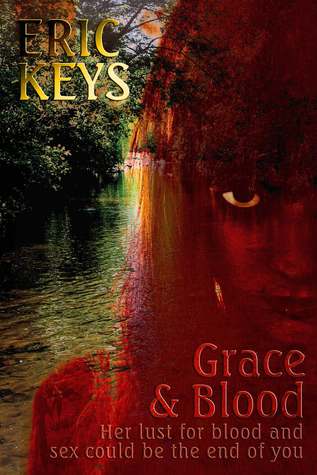 I never know where Erik Keys’ is going next. When Erik tells me he’s got a new book coming out, a thrill shivers up my spine, followed swiftly by a shuddering clenching in the pit of my stomach; what am I going to be confronted with this time? I’m still not over the repulsively anti-Semitic Ilsa in For the Glory, and as for the taboo shattering Mstislav; vengeance and glory, my head’s still spinning with suggestions of forced sex; interspecies sex, incest and necrophilia. My shattered nerves have still to recover; I had just regained my composure enough to pick up a book, when Erik casually, just happens to mention, his novel, Grace and Blood.

Introducing Gracie; the protagonist of Grace and Blood; Gracie the nymphomaniac, the psychopathic heroine of Erik’s latest book. Gracie, at just eighteen, is exactly the sort of girl you pray your daughter will never choose as her BFF – look out, look out Gracie’s about; mothers, lock up your sons. Wives, hide your husbands – Gracie is on the prowl.

As a writer, I am daunted by Erik Keys’ ability to write the taboo in such smooth, tantalising prose. His writing is beautiful; lyrical. I haven’t yet worked out how he does it; how he can create such amoral characters and get his reader to fall in love with them. In the case of Gracie, maybe it’s her sheer audacity; whatever, however, I am besotted with Gracie.

Gracie would be a worthy accomplice to Norman Bates; how she would love that seedy motel. She could step into Bette Davis’ shoes in Whatever Happened to Baby Jane? Gracie wriggles beneath your epidermis like a pruritic skin infestation.
And Erik Keys is working on a sequel to Grace and Blood. The character of Steve, a hired killer, takes over from Grace the role of first person narrative. I’ve read a rough draft and believe me, Steve and Gracie together are a terrifying force to be reckoned with. The working title is; “The Blood-lust Gnosis of Carrie Jordan” although this may change.

In his previous books, Erik Keys has playfully hinted at the compelling force of sex to influence world events; I have an uneasy feeling that in this sequel, that notion will become a reality.

Erik Keys’ sequel stands alone as a great story; you won’t need to read Grace and Blood first. But to get where Gracie is coming from, do read Grace and Blood. And read everything by Erik Keys; follow his theme of the sacred and profane. If you haven’t yet read him; I’m envious. You have a lot to look forward to; if you have read him, you’ll know exactly what I am talking about.

Here’s my review of Grace and Blood, by Erik Key’s. (Amazon wouldn’t post it; I regard this as a badge of honour. The review is at Goodreads, along with my reviews of For the Glory and Mstislav; vengeance and glory.)

There’s murder in these pages; there’s blood and guts. If you want depravity, you will find it here. Gracie’s seduction of her boss, Kevin, is sensual, arousing; outrageous. It’s perhaps how we would like to behave; if only we had Gracie’s nerve.
Always teetering on the edge of subversive, Eric Keys undermines our notion of the sacred, our concept of what is good and holy, into a metallic, screeching nightmare; hey, welcome to the world of the profane.

It’s a schizophrenic story both in content and in Gracie’s mind. A ghostly Katie directs Gracie’s actions; but the fact that she is being told what to do, does not negate Gracie’s culpability. Gracie simply does not care; she acknowledges her actions and moves on. There is no redemption; no reconciliation for Gracie. What would be the point?

So what makes Gracie’s story so shocking for the reader? I think it lies in the tone. The note that Grace strikes is lulling. This happened…that happened; in Gracie’s world, all of this is entirely normal. Our shock would surprise Grace; our shock may even amuse her.

If you are going to look for logic here, you won’t find it. You will be wasting your time asking Eric Keys to explain Gracie’s actions; I’m guessing that he probably doesn’t know either. He give’s Gracie a free rein; he gets into Gracie’s head, or Gracie gets into his and she writes her own lurid tale. And through Gracie, Eric Keys delves into his theme of the sacred and profane.

Eric Keys has taken the concept of “what if,” to the extreme; “what if I created a character motivated entirely by lust?”

Eric Keys is a canny writer who makes his reader think; he’s made me think. I’m guessing that he has made himself think too. Read Grace and Blood; yes, it’s shocking, but I’m willing to bet that sometimes you will catch yourself smiling.”

For the Glory is at Amazon US And Amazon UK

Check out also; Mstislav: Vengeance and Glory – also by Eric Keys. At Amazon US and Amazon UK