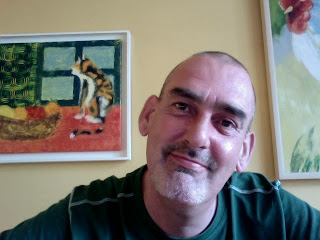 Hello Jan. Thanks for coming to my blog. Tell my followers a bit about yourself and the sort of things you to write about...

Thanks for inviting me, billierosie. About writing, it has always been very easy for me, and it certainly helps to grow up in a totally mad and dysfunctional Flemish family: as a child I had to retreat into my own fantasy world in order to cope with the violence and drama around me. The results were my first tales, read aloud by my teachers in the classroom. I also read a lot, every fairy tale I could come across, and then during my adolescence I made a 180° switch to everything horror: I discovered Edgar Allan Poe and subsequently plunged into the world of Dracula, Frankenstein, Doctor Jekyll and Mister Hyde, The Portrait of Dorian Gray and the horror pulp fiction of the seventies.


(BR)Yes, those wonderful tales that fire a writer’s imagination. But what about Jan; tell us a little bit about yourself as an adult.


(JVL)When I was in my early twenties and a student of art history, I met the first love of my life during a holiday in Italy, a Tuscan man. What began as a beach flirt lasted for twenty one years, and Italy and his family became my second home. It is not for nothing that so many plays and gothic novels are set in this country, for if you’re a bit open minded there is colour and drama and comedy and scheming and -especially- lust at every corner of the street.


(BR)What about your first tales and how they were received?


(JVL)My first collection of short stories was published in Dutch in 1988, “A spark of genius”, with very Italianate dark tales featuring cut fingers, skulls, suicide, burying alive, betrayal and murder. It aroused a lot of interest at the Frankfurt book fair from abroad, a Frenchman translated the title tale, but apparently the Flemings didn’t want to invest in an author who didn’t write about lofty subjects such as the Flemish identity and whose tales were “archaic” and set in another country.


(BR)I think it was James Joyce who first broached the concept of a writer being an exile in his own country. It’s sad but true, that writers are often shunned by the very people who should feel proud of their work. A Twitter friend, also a talented writer, has mentioned many times that he “frightens the mainstream.” And this has happened to you. But you continued to write?


(JVL)Since then I have never been able to stop writing, hundreds and hundreds of pages, novels, short stories, plays, screenplays, academic papers. As I said before, writing is easy, but being a writer can be a bit more complicated: you are thrown into a market place where second guessing the tastes of the public in order to gain a lot of money is paramount and where a lot of critics and publishers are apparently brain dead. I don’t want to sound too negative, but when you write -and you know it too!- from your guts and about things that undermine the natural longing for a bit of predictability and security in life, you can get into trouble. It’s a bit of a contradiction: on the one hand sex and violence are the two main ingredients in a lot of books and films, but when you let the devil out and describe how violence and depravity lurk in everyone of us, waiting for the occasion to be released, you can get some nasty reactions. People accused me of being insane having written such a tale as “Epistle of the Sleeping Beauty”, the story of a married man who makes love to a dying boy, while they think nothing about the Stallone and Schwarzenegger films where hundreds of people get - very superficially - killed.


(BR)How does being gay affect and inform your writing?


First of all, I consider myself -and I had never problems with it and never had to hide myself- as a homosexual, or to put it simply as a man who prefers to have sex with another man instead of a woman, although I have had stories with women. As for being gay, I have my doubts; I certainly like Abba and Céline Dion, and yes, I have a tattoo, the signature of Mozart, on my upper arm, but I don’t feel very attracted to our subculture, it seems we have to be gay and being in the spotlight all the time. And oh, I’m very happy to be 54 now, when I was younger the general opinion was that ageing was the most terrible thing to happen to a homosexual, but I’ve come to the conclusion that love and sex -and especially love- aren’t all about being young and handsome.


Another thing, as a writer I had some of my more depressing moments with the gay community, publishers not paying me and receiving vicious attacks that I write “homophobic stuff”.


I most certainly participate in the battle for equal rights and I’m horrified when I read about how we were and still are considered and treated in many countries, but I also think I have the right to explore the more unusual aspects of sex, in my case sex between men. And I simply refuse to censor myself: if I come up with the idea of a man wanting to eat the excrements of his lover from his arse and stabbing himself afterwards in order to smear the content of his stomach all over his body, I go sit down before my computer and tell the story. It brings me to mind Stephen King who once said: “I ask myself what I can’t write about, and then I write about it.” Before I can ask myself that question, the story has generally already taken form on paper...


(BR)You live in Brussels, Belgium, now, and you have a relationship with an Algerian man of your age...


(JVL)In the last few decades Brussels has become a very interesting city! I remember how in “Plenty”, a film set here during WWII with Meryl Streep, an Englishman spoke about “this most debilitating city”. Well, those times have gone, and the particular thing about Brussels is that there is no majority anymore and that, contrary to other cities where the different nationalities have all more or less their own neighbourhood, some 180 nationalities are thrown together here on a few square miles. It can get edgy and you certainly have to keep your wits about you, but on the other hand it’s very inspiring. I wrote some 70 tales in a year about things happening here, from buildings collapsing due to neglect over being picked up on the street by a married African man to “pub wisdom”.


(BR)A final question: what do you think about being a writer and do you have a specific genre?


(JVL)I more feel like a storyteller. As for genre, I like tales and urban legends, and I like horror and comedy. Many psychiatrists think that horror mainly generates from the suppression of sexual desire, and that’s what certainly explains the incredible power of the 19th century English and American horror novels. In France (and Belgium) however, where there is more flexibility in sexual matters, horror has a more diluted character. When horror appears in my tales, it’s most likely psychological, more the inner demon than torture porn. But even when I think I have written “dead serious” things, some readers tell me they have been laughing to tears. Maybe that’s the one thing about writing: “to elicit emotions”, whether it be tears, laughter, disgust or downright hostility...


(BR) Another final question! The two stories you have on Twitter; the Epistle of the Sleeping Beauty and the Body of Christ have been immensely popular and have now been read by thousands. I know that this pleases you, all writers want their work to be read...but does it surprise you?


(JVL)Thanks to all my readers, it’s a tremendous compliment to know that people like my tales. And yes, it is a very pleasant surprise when you tell me how many people have read my stories. But thanks to you, billierosie, for creating a blog that is original, instructive, sexy, open minded, without at all costs wanting to be shocking or provocative.


BIO: Jan Vander Laenen (° 1960) lives in Brussels, Belgium, where he works as an art historian and translator (Dutch, French and Italian). He is also the author of numerous collections of short stories, plays, and screenplays which have attracted keen interest abroad.
A romantic comedy, "Oscar Divo", and a thriller, “The Card Game”, have been optioned in Hollywood, while his short fiction collections, "The Butler" and "Poète maudit", and his horror play "A Mother's Revenge" are eliciting the requisite accolades in Italy.


Jan’s most recent publication are the tales “A Glass of Cognac” available as a free read here.

The E-Books “Skilfully and Lovingly” is here;

“The Centrefold and other Stories of working Men” is here.

The Dutch and French version of Jan’s novel “The housekeeper and other scabrous tales” may be a little difficult to track down, but try this link.


Jan loves to hear from his readers -- his email address is jan.vanderlaenen@skynet.be;

Jan is a member of the Poe Studies Association and the Horror Writers Association. He presented his paper "Hypotheses on Poe's homosexuality" at the Bicentennial Congress in Philadelphia in October 2009, and his paper “The monstrous and the fantastic in the short stories of Edgar Allan Poe and the paintings by Antoine Wiertz” at the 33rd International Conference on the Fantastic in the Arts in Orlando, Florida, in March 2012.

Lectures on Poe, Baudelaire, Wiertz, Andersen, Grand Guignol and the guillotine were given in 2013 at the universities of New Orleans, Porto (Portugal) and the Paris Sorbonne. Four more lectures are scheduled in 2014 in Paris, Louisville (Kentucky), Madrid and Milan.