I first heard about the article in the Guardian from Kristina Lloyd on her Facebook page.
Here is what Kristina says:
“And once again, those who've been quietly penning erotica for years are portrayed as copycat hacks now that their work is finally selling.”


Personally, I am utterly fed up with hearing about E.L.James’ book. When I read this, I certainly do not warm to 50 Shades. I have my personal favourites in the world of written erotica. Most of them know whom they are, some of them don’t. I’ll stick with the writers whom I know and love.

So what do you think of Emma Brockes’ article? 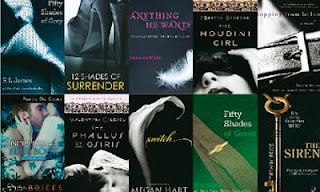 Worst ideas of 2012: ripping off Fifty Shades Of Grey
Only a masochist could love what has happened to the book trade.


There are several ways to measure success – the kind when something does so well, everyone instantly hates it. Imitation is one; merchandising is another. Perhaps the greatest indicator of all is when it jumps out of its commercial category. I thought of this during the summer, in New York, whenever I walked into a deli or a drugstore and saw, alongside the lip balms and key chains, a stack of 20 or so copies of Fifty Shades Of Grey(other titles on sale: none). Somewhere in there, it had stopped being a book and become a convenience, the literary equivalent of breath mints.


So what if it's "badly written?" At least it was born, seemingly, of a genuine enthusiasm and James appears to be a good egg. If there's a Worst Of scenario in here, it is in the other stuff, the stampede that follows the original hit, unredeemed by individual voice or vision, just the cynicism of cashing in. Even the covers are the same. The original title was put out by an obscure Australian publisher that slapped the quickest, cheapest-looking stock image on the cover – and so, with a faithfulness approaching superstition, everyone has copied it.


So, too, with every other detail of the trilogy – which, given that Fifty Shades itself started out as fan fiction, is a doctorate in meta-meta-something-or-other waiting to happen. Hence a novel called Bared To You in which "two wounded souls come together in an explosion of lust and passion as intoxicating as it is devastating – the perfect read for fans of bestselling erotic romance Fifty Shades Of Grey by EL James", currently riding high in Amazon's charts and containing the following auto-generated gem: "Gideon Cross came into my life like lightning in the darkness – beautiful and brilliant, jagged and white hot. I was drawn to him as I'd never been to anything or anyone in my life. I craved his touch like a drug, even knowing it would weaken me. I was flawed and damaged, and he opened those cracks in me so easily…"


Reports from the Frankfurt Book Fair this year were of little else but Fifty Shades knockoffs. In some of the most feverish bidding, a six-figure sum was reportedly offered for a Canadian novel called SECRET, written under the pseudonym L Marie Adeline and featuring an organisation "that recruits women to help them realise their sexual fantasies and liberate their sexual selves". The competition, as a weary editor at Faber pointed out, included some form of "zombie erotica".


No market was immune. In Japan, Scandinavia and the rest of the world, dashed-off tales of sado-masochism dominated the auctions. In South Africa, a publisher told me of the surge in Afrikaans erotica, which had the advantage of sounding oddly hilarious as well as depressing.

As for Fifty Shades, after selling an estimated 40m copies worldwide, it is now published by the poshest house in the US, Knopf, so EL James is in a stable with Toni Morrison, Alice Munro and Philip Roth. You can imagine the publisher's rationalisation, like those upmarket movie stars who tell you that every blockbuster they do funds their work in experimental theatre.


So it goes. There are reportedly Fifty Shades-branded sex toys coming down the chute, as well as lingerie and pyjamas, because we are, apparently, that tame and suggestible in the face of market forces. It is, however, somewhat cheering to note that, according to the Amazon metric, large numbers of people who bought Fifty Shades Of Grey also bought a herb kitchen garden kit, endorsed by no one, relating to no broader trends and on the heels of absolutely nothing.