He's here; in the heathen U.K.! Pope Benedict XVI, is spreading benedictions and holy water all over us, as I write.Here's a little tribute to his Eminence to commemorate his arrival. From the pen of Jan Vander Laenen.

Check out Janine Ashbless' article on the Pope's visit. 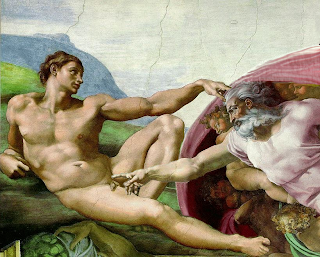 As a convinced libertine and fervent adherent of free men’s love, Thomas had every reason to loathe the Catholic church. Hadn’t his entire behaviour been condemned in its ludicrous encyclicals, which were a downright assault on the most fundamental human rights and had an unmistakable Nazi odour; hadn’t he and his brothers been continuously chided from the pulpit by its representatives, a handful of priests who claimed to have a lease on wisdom, but knew nothing about real life, and that his sinful lifestyle could, according to that church, only lead to eternal damnation in the sulphur fires of hell?


No, it was a criminal swindle, the whole Jesus-Mary-Joseph story, and when he turned eighteen, when he was able to shake off the yoke of his traditional upbringing, Thomas had decided not to go into a church ever again.


In the meantime, he reached the age of twenty-six, and it was a sultry summer evening in Brussels, a summer evening when one can literally sniff eroticism and throw all one’s reserves and principles by the wayside.

Such as the principle never to go to church again…


As Thomas was strolling passed a dark, late Romanesque chapel near the Market Square, he came across another lad, a lad who looked at him invitingly and who looked particularly tasty with his sturdy legs and expressive dark head.


Thomas was no greenhorn anymore, he recognised immediately a member of his own, according to the Catholics, damned community, and decided to try to approach this enticing lad at once. He asked him nonchalantly the time. And whether he lived in the neighbourhood.


“I am staying in Antwerp,” answered the lad, with a strange, somewhat funny accent.
“And I do not live nearby,” Thomas had to add.


The lack of an immediately available bed could not however extinguish the urge in either to consume bodies erotically and voluptuously, so they pushed the massive, wooden door that gave access to an nearly empty church, except for an old woman who was praying.


The tiny confessional with purple curtains immediately became their love nest, a love nest where they could paw, and kiss and lick each other to their heart’s content.

And to spit on religion.


Because “repeat after me: Mary was no virgin, Mary was a traitor and had a Roman lover in secret,” Thomas panted while he sucked on his partner’s nipple.


“Mary was no virgin, Mary was a traitor and had a Roman lover in secret,” the young lad repeated in a whisper.


Repeat after me: “Jesus was not the son of God, Jesus was a mentally deranged compulsive liar and the people were right to nail him on the cross,” Thomas cursed further, while he now kneeled with devotion and left a trace of saliva with his moist mouth on the hairy and curvy buttocks of his partner.


“Jesus was not the son of God, Jesus was a mentally deranged compulsive liar and our people were right to nail him on the cross,” the young lad blasphemed echoing Thomas.


At this point they both climaxed, and sprayed the wood of the confessional with their sinful sperm.


“Did your parents used to force you to attend mass every Sunday too?” asked Thomas by way of after-play when they had had their fill and were on their way out.


“Me?” asked the lad with a mysterious and somewhat indignant smile,” this is the first time that I set foot in a church. I am Jewish.”


“Shalom,” was the only answer that the somewhat surprised Thomas could think of. “If everyone,” the young lad continued, “if everyone had thought like this about Joseph and Mary and Jesus, our people would have been spared a heap of misery.” He gave Thomas a kiss of Judas on the left cheek and left the place of worship.


Thomas stood certainly twenty seconds somewhat surprised against a pillar. Then he took a step to the side, immersed his sperm-covered hands in the holy-water font, and washed them clean.
Posted by billierosie at 02:18