The Pied Piper of Hameln 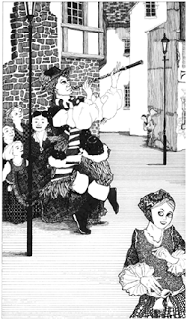 I love Robert Browning’s poem; THE PIED PIPER OF HAMLYN. I love its lulling rhythms, the chanting, lyrical story that it tells.

I went to Hamlyn some years ago; I walked over a bridge, crossing the River Weser, deep and wide…

I came away enchanted; I imagine most tourists do. At the time I never gave much thought to what happened to the children of Hamlyn. If I did, it was of a Disneyfied version.

But it’s a strange story; a whole generation of kids just disappearing. Has anyone ever asked what exactly happened to the children of Hamlyn? Browning’s narrative poem is based on an actual event. Something went very wrong in that quaint German town, so many years ago.

Jack Marx talks about the narrative poem on his blog. The story of what happened to the children of Hamlyn.


“Most of the English-speaking world knows of the Pied Piper from the poem by Robert Browning, which itself was adapted from the tale as told by The Brothers Grimm. The story goes that a flamboyantly-attired troubadour promised to rid the town of its rat infestation, which he did by hypnotising the vermin with his flute and leading them to drown in the nearby river. However, when the townsfolk refused to pay him for his services, the piper took revenge by leading the children of the town to an unknown fate, never to return.

As fairytales go, it’s one of the more ghastly, whose moral appears to be little more than a warning about neglecting bills. But the legend seems based upon a true incident whose exact details have vanished into history, to be subsequently coloured in by centuries of folklorists. What is certain is that there is a town in Germany called Hameln and some children did go missing there sometime in June, 1284, the event so significant the early Hameln statutes measured the passing of time in ‘years after our children left.’


But there’s something about the silence in this tale - an event so terrible it remains forbidden to play music and dancing on a certain street in town, that suggests something more dastardly than an organised change of address took place.


Is it just possible that the fate of Hameln’s children was dealt with the townsfolk’s knowledge, if not necessarily their blessing? Perhaps they were sold, ‘donated’, abandoned en masse, or simply neglected, in a moment later regretted. At very least, they were lost, and nobody wants to be responsible for loss, especially a parent.

Enter the Pied Piper, with his seductive ways and other-worldly appearance. It was he who took the children, and then he vanished, an alien abduction for the Middle Ages. He is an invention, a diversion, and an absolution at once. Browning and the Brothers Grimm were probably closer to the truth than the town scribes - the Pied Piper was not so much a tragedy as a dubious transaction, and the less said about it the better.”


The writer, John Boswell, casts children as a kind of burdensome currency in the Middle Ages. All over Europe, they were frequently left to die in the wilderness, sold into the slave trade, used to pay debts, made to ‘disappear’ en masse so that rivals could be blamed and forced to compensate, or, most commonly, “donated” to the church, the return being relief from that mouth to feed and a promise of spiritual dividends.

The Holy Roman Empire turned something of a blind eye to the moral question of child abandonment, (no surprise there then) its various edicts on the matter seemingly more concerned with maintaining a fluid serfdom than protection of the children.

In 13th-century Spain, for example, it was law that “a father who is oppressed with great hunger or such utter poverty that he has no other recourse can sell or pawn his children in order to obtain food.”  Furthermore…

“...a father who is besieged in a castle he holds for his lord, may, if so beset with hunger that he has nothing to eat, eat his child with impunity rather than surrender his castle without permission of the lord.”

The Pied Piper story seems to have its root in an event that happened on June 26, 1284. Hamelin historian Martin Humberg states that around 1300 a stained glass window was added to the central market church in Hamelin showing "an old figure of a man in coloured clothes and surrounded by a crowd of children." The inscription around this window has been reconstructed and reads:

“In the year of 1284, on John's and Paul's day
was the 26th of June.
By a piper, dressed in all kind of colours,
130 children born in Hamelin were seduced
and lost at the calvarie near the koppen.”

Scholars disagree on the meaning of "the calvarie near the koppen" but most agree that it refers to a place of execution near an as yet undetermined hill. There are many other references to the story in Hamelin itself, including a street named "Bungelosen Strasse," literally "the street without the sound of drums," allegedly so named because dancing was forbidden in that street in memory of what had happened to the children.”

In A World Lit Only by Fire (1992) by William Manchester, Manchester makes a passing reference to the Pied Piper of Hamelin. According to Manchester the piper was a psychopath and a pederast who was involved in some sort of mass child killing. Many of our children's stories are based on real events, many of them sinister and certainly not the type of thing you would want to lull your child to sleep with, but this seems especially grim. Is this true, and if so what's the whole story?

The quote in question comes from page 66 of Manchester's book and reads;
"The Pied Piper of Hamelin . . . was a real man, but there was nothing enchanting about him. Quite the opposite; he was horrible, a psychopath and pederast who, on June 24, 1484, spirited away 130 children in the Saxon village of Hammel and used them in unspeakable ways. Accounts of the aftermath vary. According to some, the victims were never seen again; others told of disembodied little bodies found scattered in the forest underbrush or festooning the branches of trees."

Manchester doesn't footnote this passage and although he does give a long bibliography at the end of the book, the reader can't readily determine where he got it. The official website of the German town of Hamelin makes no mention of it, which is no surprise, since the romantic version of the legend has monetary value and they have an official town "Pied Piper" to this day. Perhaps Manchester got some of the details wrong -- among other things, he appears to be off about 200 years on the date. But he didn't just make the whole thing up.


The legend of the Pied Piper has probably as many variants as it does tellers. The most popular versions derive from the poem by Robert Browning and the fairy tale by the Brothers Grimm. In pretty much all versions, rats infest Hamelin and the town hires a travelling rat catcher to exterminate them. When he does so, the king, mayor, or whoever decides not to pay him, so he extracts his revenge by spiriting away the town's children.

Taken at face value, the inscription suggests that Manchester was right --130 kids came to a bad end at the hands of a deviant. But there is no corroborating record of any mass execution of children in the vicinity of Hamelin, which would seem to be an important event if it really happened.

The window with the inscription was replaced in 1660 and is now lost, so we're relying strictly on secondary evidence and not much of that. There doesn’t appear to be any factual basis for Manchester's lurid tale of "disembodied little bodies found scattered in the forest underbrush or festooning the branches of trees."

The earliest versions of the tale make no mention of the piper's skill as a rat catcher--that part of the story doesn't show up in literature until about 1550. It appears that the final tale was a mixture of the true story of whatever happened to the children in Hamelin plus various European rat catcher legends. Stories of an itinerant rat catcher similar to the one in Hamelin show up in Austria, France, Poland, Denmark, England, and Ireland. Duke Froben von Zimmern (1556) was the first to put the legends together into the tale we know today. Fifty years later Richard Verstegan was the first to tell the tale in English and introduce the name "The Pied Piper" in his book A Restitution of Decayed Intelligence.

But there is still too much speculation and not enough evidence to say what actually happened to the children of Hamelin in 1284. A typical conjecture might be; the Pied Piper was a charismatic leader who, in the eyes of the ecclesiastical as well as secular authorities, misled a group of young people in a revival of pagan worship. He and his group were therefore captured and killed.

One currently popular interpretation comes from Jurgen Udolph and focuses on the variant that the children emerged from the cave either in Transylvania or somewhere in eastern Europe. Udolph believes that the phrase "children of Hamelin" should be interpreted figuratively and not literally. He thinks the tale may refer to an eastward migration of people from Hamelin into the area between Berlin and the Baltic. The theory has root in German historian Wolfgang Wann's conjecture that Bruno von Schaumburg, who was then Bishop of Olmutz, recruited some residents of Hamelin to settle in Moravia. This would have happened in 1281, three years before the date in question.

Udolph rejects this particular idea but thinks something along the same lines may have occurred. He uses place names to fortify his speculation, on the theory that people who relocate to a new land tend to name their new homes after the places they came from. Therefore, it should be possible to trace new settlements by establishing the origins of their names. In an article in Time International, Ursula Sautter reports:

"After the defeat of the Danes at the Battle of Bornhoved in 1227, the region south of the Baltic Sea, which was then inhabited by Slavs, became available for colonization by the Germans." The bishops and dukes of Pomerania, Brandenburg, Uckermark and Prignitz sent out glib "locators," medieval recruitment officers, offering rich rewards to those who were willing to move to the new lands. Thousands of young adults from Lower Saxony and Westphalia headed east. And as evidence, about a dozen Westphalian place names show up in this area. Indeed there are five villages called Hindenburg running in a straight line from Westphalia to Pomerania, as well as three eastern Spiegelbergs and a trail of etymology from Beverungen south of Hamelin to Beveringen northwest of Berlin to Beweringen in modern Poland.

Udolph's explanation seems likely. Like most legends, the Pied Piper story probably has its origin in something more prosaic than fantastic.
But the fantastic does make a much better fairy tale.

This blog post has been put together using sources from the Web.
Posted by billierosie at 06:19