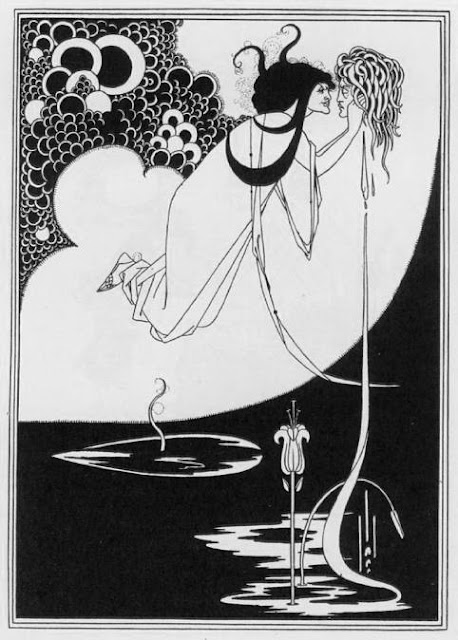 It seems a strange notion; a link between sex and death. I think most people would agree, that life's greatest drives are to reproduce and to avoid death. The Austrian psychoanalyst Sigmund Freud and the French social theorist Michel Foucault argued that the two are fused, that the death instinct pervades sexual activity. I’m not sure whom came up with the idea; Eros and Thanatos, Freud or Foucault, but that is the term generally used to demonstrate the concept. Sex and death are inextricably linked.

Our lives seem to be governed by polar opposites. I think it is helpful to think of Thanatos (death) in these terms suggested by Doctor Stephen Farrier.

“But Thanatos (death) is often overlooked. I think of it as the desire for zero excitation - total non desire (which of course is death)."

And, of course, the French have given us the concept of “La petite mort”; “the little death.” A wonderful metaphor for the orgasm.”


In the Encyclopaedia of Death and Dying, the writer suggests that;

“…with the AIDS epidemic their (Freud and Foucault’s) view has become particularly poignant. A 1992 study from Amsterdam, for instance, found that about one in six U.S. soldiers surveyed said that sex without condoms was worth the risk of getting the AIDS virus. A year later a story released by Planned Parenthood counsellor offices in San Antonio, Texas, explained how teenage girls were demonstrating their toughness by having unprotected sex with an HIV-infected gang member. It seems that, for some, sexual desire is intensified in the presence of taboos and boundaries, even deadly ones."

Are human beings inexorably drawn to what can damage, or even kill them? Is there really a pleasure in dicing with death?


The Encyclopaedia of Death and Dying again;

It seems that the sex drive and the death drive are powerful forces. But hang on a minute, we don’t all take dangerous risks, do we? Surely, most of us live quite sedentary lives. Sometimes life has a way of tripping us up. Someone lets us down, badly. Love may be unrequited. Our own bodies might betray us.

“To be betrayed feels like surrendering to a painful process of death, like being forced to experience the pain of abandonment and loss. Each death, however, seems to be a “sacred” process of transferring to new forms of existence. As Carl Jung reminds, the development of personality almost always passes from a deathly sacrifice, and if we manage to process the experience of betrayal and mourning, the result may be transformation.

Betrayal might seem abhorrent to our conscience. Nevertheless, without maturation deriving from the experience of betrayal, we remain trapped in the unconscious, repeated questing of a merger with another person. We remain out of the mystery of life forever. If we never change direction, we refuse to undertake the responsibility of existence as unique and separate entity, because the repetition of the miraculous discovery of the ego, according to Jung, is possible only if rupture takes place in its temporal consistency and in its beliefs.”


In other words, we have to allow ourselves to experience rupture in order to mature and grow. If we don’t, we remain as children for ever.

The Eros/Thanatos equation has not been unnoticed by Artists. 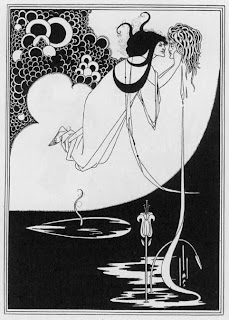 Aubrey Beardsley’s ink drawing of Salome, conveys the pivotal moment of the Biblical tale in all its gruesome detail. In a rapture that is indecent in its intensity, Salome gazes at John’s severed head with glutinous glee. Beardsley’s line is perfection. Over a blank white paper he gives us a story that is grotesque, weird, macabre, sinister, in a perverse and playfully theatrical style. Salome clutches at John’s decapitated head, as if she is about to devour it. Beardsley has conveyed the tale in all its erotic glory. Salome is sex personified: John’s death is down to her lust. The viewer is repulsed, feeling that Salome is about to burst with terrible laughter.

“And when a convenient day was come, that Herod on his birthday made a supper to his lords, high captains, and chief estates of Galilee; And when the daughter of the said Herodias came in, and danced, and pleased Herod and them that sat with him, the king said unto the damsel, Ask of me whatsoever thou wilt, and I will give it thee. And he sware unto her, Whatsoever thou shalt ask of me, I will give it thee, unto the half of my kingdom. And she went forth, and said unto her mother, What shall I ask? And she said, The head of John the Baptist.
And she came in straightway with haste unto the king, and asked, saying, I will that thou give me by and by in a charger the head of John the Baptist. And
the king was exceeding sorry; yet for his oath's sake, and for their sakes which sat with him, he would not reject her. And immediately the king sent an executioner, and commanded his head to be brought: and he went and beheaded him in the prison, and brought his head in a charger, and gave it to the damsel: and the damsel gave it to her mother.
And when his disciples heard of it, they came and took up his corpse, and laid it in a tomb.” 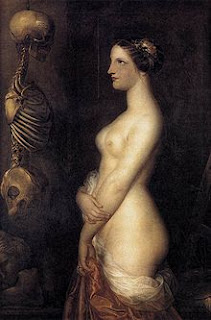 The Belgian artist, Antoine Joseph Wiertz painted a confrontation of Beauty and Death, Deux jeunes filles—La Belle Rosine in 1847. You can see it at the Musée Wiertz, Brussels.

It’s a hauntingly beautiful painting. A lovely, almost naked, nubile young woman stands before a skeleton. The young woman is not daunted by this presentation. Is it a confrontation, or is there a narrative of which the viewer is unaware? I don’t know any stories in mythology that this could have been drawn from; Wiertz is weaving a tale, but I don’t know how to read it. I have the feeling that there is more to this painting than meets the eye. Wiertz’ pictorial language is enigmatic, perhaps hinting at the Surrealist movement that was not to show its face until the following century.

Dissatisfied with the shiny effect of oil painting, Wiertz developed a new technique combining the smoothness of oil painting with the speed of execution and the dullness of painting in fresco. He has used this to effect, in this painting. It gives the work a sombre feel, even ominous. Something is about to happen to disturb the woman’s quiet contemplation. Her head is very slightly tilted, as if acknowledging the skeleton. She could be looking into a mirror, maybe admiring what she will one day become. You would expect her to recoil, yet there is no horror in the young woman’s face, there is even a hint of a small smile. 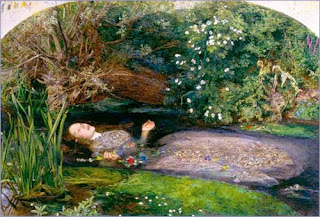 The Pre-Raphaelite painter, John Everett Millais, gives us the doomed maiden, “Ophelia.” Millais painted the picture in 1852; you can see it in the Tate Gallery, London.

Franny Moyle talks about the painting. “The model is dressed up in Shakespearean reference, it is nevertheless the depiction of a woman committing suicide and an exploration of female sexuality. Ophelia is ecstatic at the moment her life expires. The sexual charge in the picture is heightened by the abundant, competing natural world of the river bank that, portrayed with almost photographic faithfulness, surrounds this woman not only resigned to but aroused by her fate. The depiction of an offering to a greater natural order. 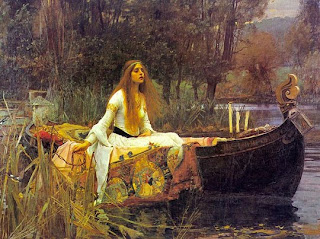 Franny Moyle commentating again. "The Lady of Shalott by John William Waterhouse, draws from Tennyson’s poem, a mythical lady, cursed never to look out of her window, chooses to sacrifice her life for a glimpse of Lancelot and then float to Camelot in a barge to face her doom.
In an allegory of sexual longing and capitulation, Waterhouse freezes Tennyson’s story at the moment the lady is about to release the chain that ties her barge. And so he anticipates the abandonment of the rational self to subconscious sexual impulses."

I think that “The Lady of Shalott,” is also at the Tate Gallery, London.

The encyclopaedia of Death and Dying.

"According to Geoffrey Gorer, such seductions derive from cultural pruderies to matters of sex and death. William May observed that as sex becomes pornographic when divorced from its natural human emotions of love and affection, so death becomes pornographic when divorced from its natural emotion, which is grief. Perhaps the pornographic connotation is why designer Christian Dior chose in the 1990s to label one of his perfumes "Poison."”

Thanks to Jan Vander Laenen, Fulani and Doctor Stephen Farrier, for helping me put this essay together. And, of course, sources from the Web.
Posted by billierosie at 06:31