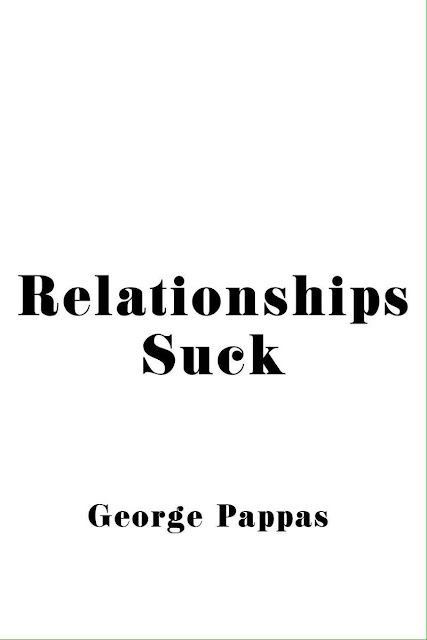 Do relationships suck too?
Just in time for Valentines’ Day, I am returning with the long-awaited sequel to my novel MONOGAMY SUCKS entitled RELATIONSHIPS SUCK which poses this provocative question.
My novel RELATIONSHIPS SUCK, which is available on Amazon and Smashwords, continues MONOGAMY SUCKS’ protagonist Jake Dalmas’ naughty and hilarious swinging and casual sex adventures while also depicting his issues and frustrations with relationships, particularly open relationships.
Jake is not alone. Recent surveys and studies indicate that all is not well with the world of relationships. A recent study presented at the American Psychological Association’s Annual Convention found that being single could be more fulfilling, due to greater personal growth and development.
A recent Pew Research Center study about the state of romance in America indicated that “most young singles in America do not describe themselves as actively looking for romantic partners. Even those who are seeking relationships are not dating frequently. About half (49%) had been on no more than one date in the previous three months.”
So many struggle with relationships and yet we keep looking for happiness just as Jake does. Even with an open relationship, Jake encounters the same difficulties. I believe this book is funny and intriguing like my first novel, MONOGAMY SUCKS, and even sexier and naughtier in parts. RELATIONSHIPS SUCK moves Jake’s story forward in cool and sexy ways.
Juliette, Jake’s sexy Asian artist girlfriend, returns for the sequel, as do a couple of other nefarious characters from the first novel. The sequel introduces a new character named Simone, a beautiful African American art gallery manager and a friend of Juliette.
Jake, Juliette, and Simone explore some scintillating erotic intercolor encounters together that are among the novel’s naughtiest scenes and some of the hottest and sexiest writing I have ever done. I am looking forward to the response from readers.
As Jake finally begins to discover the tantalizing adventures of his wild fantasies – threesomes, orgies, wild couplings with beautiful, uninhibited exotic sexy women of every size, shape, and background – he continues to question whether he should be in a relationship at all.
Can his open love with Juliette survive the temptations of the swinging world?
Will jealousy and possessiveness break their daring bond?
This next chapter of Jake’s naughty diary promises the frank humor and naughty swinging adventure that characterized the original novel, but also provides a clear-eyed view of swinging lifestyle and relationships and the limits of each for him.
I am very happy with how my sequel to MONOGAMY SUCKS has turned out. I have recaptured Jake’s sardonic, humorous voice from the original novel while also showing how he has grown as a person through his experiences. It has been a long journey as I started this book seven years ago before my former publisher originally launched MONOGAMY SUCKS.
I am thankful for the help I received from fellow author Billierosie, known as @jojojojude on Twitter, who gave my novel one final copy edit.
Many thanks also to book cover artist Dancinee Jennings who worked with me to put together this book’s cover as well. She also helped me previously with the cover for my indie version of MONOGAMY SUCKS.
What’s next for me?
Soon I will be working on a science fiction novella based on a short story I wrote when he was 18, and later this year, I will republish my novel DEAR HEF, which explores online dating and sex and has a provocative celebrity angle, on Amazon and Smashwords.
Until then, I am thrilled to share the return of Jake’s naughty diary and hilarious journey.
Dear reader, I am looking forward to your response as always.

Relationships Suck is at Amazon US  and Amazon UK
Posted by billierosie at 04:35