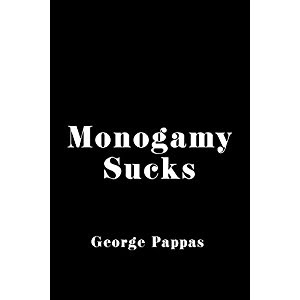 At last; it’s here! I’ve been waiting for this a long time. George Pappas has republished his book Monogamy Sucks. Those of you who follow George on Twitter will be familiar with the hows, and whys…the stories behind the story. The expurgated version of Monogamy Sucks was originally published by Lazy Day Publishing…expurgated, because publishers are uneasy with explicit erotica, their delicate sensibilities are easily shaken and offended. George made the requested edits; it didn’t sit easily with him, but, like all writers, he wanted to see his book published. But then Blushing Books took over from Lazy Day and Blushing Books were horrified; they could not have such perverted filth besmirching their pristine, creamy white catalogue. Having been gravely offended by the mere mention of Sex, let alone Swinging, Blushing Books gave George back the rights to his books.

This new edition of Monogamy Sucks is as provocative, if not more so, than the expurgated version. If you are completely new to George Pappas’ ideas and humour, then you are in for a real treat. The story is told in diary form, by George’s protagonist, Jake; one entry after another exposes explicitly the life that Jake wants. “Guilt free sex…is that too much to ask for?” Apparently, it is. He condemns an established way of life with a visionary’s zeal. His zeal, his absolute intent, is to subvert the natural order. The narrative is driven by Jake’s diary entries; they are provocative and, therefore, dangerous. I’m all for subverting the natural order, I’m always provocative and I love a little slice of danger; so as I say, I was curious. I read on.

Jake Dalmas is bitter and angry. So, as I say, my curiosity is piqued; I am allured and yes, I am intrigued as to where Jake is going with this.
So I immersed myself in the book that is the subject of George Pappas’ very frequent, wonderfully lyrical tweets.
And George Pappas knows how to turn a girl’s head with carefully crafted words; I’ve read his poetry, quite a lot of it. So I knew that I was going to be allured; dazzled, with an elegant display of exquisite prose. But I wasn’t expecting to be amused and entertained to the point of laughing out loud.

“October 11
My ad has been in the Express for a week now and there has been absolutely no response. It’s depressing. I am starting to have mixed feelings about the whole thing. Still, a part of me is also somewhat relieved. I really don’t know what I am going to do when someone calls. I am at war with my hormones. My need for pussy without strings is in conflict with my fear of rejection and my basically timid nature. I become extremely nervous when calling a woman I have met for a date. Yet this is different. This is a woman who I will be calling for sex. I will have to seduce her on the phone, and I am not sure if I really know what to say. I have overwhelming doubts that I can go through with this.”

The humour is gentle, poignant, tender even. I sense Jake’s desperation; his vulnerability is engaging and I like him. I want to listen to him.

I can’t think of any other writer with such an acute sense of the absurd than George Pappas. And what is more absurd than sex and the strange roads we travel to get it? The need for sex drives us when we’re not getting it.

Then there is the need for even more sex when we are getting it which drives us even more. We turn into ravenous, slobbering creatures hoping that any innocent liaison will turn into rampant sex.
It is almost as if we’ve never really progressed beyond the insecurities of adolescence. And George Pappas’ character, Jake Dalmas is hopelessly insecure; he has a shyness around women, especially attractive women that ensures he never really progresses beyond flirtatious eye contact.
And it is not only comedy where George Pappas excels. His erotica tips over into the pornographic. He’s an edgy writer playing the reader with uncertainty. Where the hell is he going next?

But back to Jake and his quest; does he really have the qualities of a revolutionary?
He is certainly driven. His diary entries catalogue his utter rejection of conventional relationships; he’s been there so many times that he knows that after a few months he will become emotionally claustrophobic; he knows that he will be suffocated to the point of his psyche being damaged if he can’t find a way out.
That is an absolute guarantee.
And it is at this point, the point of Jake’s rejection of conventionality, that we join his journey; his quest. Not for another suffocating relationship; Jake wants a world where casual sex is the norm. Where men and women fuck for the sheer joy of fucking, then move on quickly to the next casual fuck. Jake knows he has mountains to climb and his first task is to indoctrinate women into the joys of casual sex.
A world of absolute, guilt free sex.
Jake Dalmas is a wannabe Swinger.
He yearns to meet women who will understand his ethos of casual sex; women who know how to celebrate fucking with the exuberant spirit that is so essential to him.
Sex is permanently on Jake’s mind. Yes, he’s a wannabe Swinger, but he’s insecure and vulnerable. He has the sort of erectile dysfunction that men dread and few would admit to. Jake can’t always get it up. His penis lets him down in the worst possible way and often at the crucial moment…Jake’s erection fades to a flopping flapping flaccid embarrassment.
Pathos. Jake’s failure to copulate is made funny, but the scenes awaken our emotions to the vulnerability of the male.
Jake cuts a lonesome figure in the pages of his diary and like all revolutionaries taking an extreme position, he is isolated. But Jake doesn’t hold back; everything, absolutely everything goes into his diary entries, from the raging erection that wakes him in the morning, to the dark despair of sating a demanding, throbbing erection every evening.

But having made his stand for this brave new world of fucking, Jake is faced with the problems of all political extremists; he has to embrace subterfuge to be in with the in crowd. And this is an in crowd he yearns for. He’s not yet one of them, but if he appears like one of them they’ll think he’s one of them. He feels like an imposter; he is an imposter. He has yet to prove himself worthy. How does Jake become a Swinger?
He runs an Ad in the Express magazine. When he meets no response he replies to Ads and is dismayed to discover that the Ads are placed by call girls.

“I want the person I fuck to WANT to be there. I don’t want our sex together to be her fucking job, as most of us hate our jobs. Why should it be any different for call girls?”

He has blind sex dates. After such a date with Vivian he learns the mysteries of female ejaculation; he is still depressed.

November 14
“When Vivian arrived at my apartment, I felt like sending her home. I’m not into granny sex…What the hell was she doing here? I didn’t want to fuck my grandmother...Vivian began panting, wheezing and moaning almost immediately. I was hoping I wouldn’t give her a heart attack or something and she would die in my apartment. It would be just my luck.”

He misses; “the chemistry the eye contact and physical presence of another person. I want real sex and phone sex is a poor substitute.”

Jake meets Pam, a nurse. Jake has always had a thing for nurses; he and Pam have great sex, but Jake breaks an unspoken rule. He never does find out what it is, but Pam distances herself and doesn’t return his calls.

“Frankly, Swinging is still a fantasy lifestyle for me. It might as well be happening on another planet. I am still a Swinger in training, but meeting a woman like Pam gives me a lot of hope that someday soon I will fulfil my fantasies.”

Jake is heading for overwhelming disappointment. But he is stoical. He embraces his mantra and has more sex with more women he finds dull and unattractive. Women who don’t seem to have any knowledge of personal hygiene. This, combined with Jake’s premature ejaculation, post-cum depression and the much needed erection utterly out of control and misbehaving; well, it is hardly surprising that Jake develops anxiety about his performance leading to more depression.

Sex at work. A gang bang at work. Jake discovers Viagra; he can fuck all night like the stud he wants to be. Jake is a worthy Swinger.

And now I’m going to stop writing about the book. Spoilers annoy me. I’ve read so many reviews of great books where the ending is given away. For me, it upsets the experience of reading. And you won’t see the ending coming I promise you.

So let’s get serious for a moment. Our ideas about monogamy go back centuries and are linked to ideas around inheritance and integrity. “Til death do us part” goes the sacred vow in the marriage ceremony. But just supposing you married your partner when you were 16 and both of you lived until you were 96 that would be 80 years of not only living with, but having sex with that same person. I’ve no doubt it has been achieved, but I think that’s a helluva big ask.

All those centuries ago we didn’t have the luxury of living a long life. In the 16th century Bess of Hardwick married and buried 4 husbands. Bess really did live by her marriage vows, staying on with each husband until they were separated by death. Then she’d move on. Perhaps Bess was a 16th century Swinger.  Maybe we’re just not cut out for those long drawn out relationships. Maybe divorce is a 21st century social necessity.

There are examples in literature too. Will Shakespeare’s Falstaff was most certainly a Swinger drinking and fucking his way around merry England. And in the 14th century Geoffrey Chaucer writes of the Wife of Bath, who was first married at the tender age of 12 and has since married and buried 5 husbands.

There’s a fork in the road up ahead. One nicely tarmacked track will keep you on the straight and narrow. That’s the safe road. The road that leads to monogamy. Or you could take the rocky track, littered with treacherous potholes. It’s a scary track, but there’s stuff going on there that could lead to something exquisite; something that will change your life forever.

Jake's adventures will return in the sequel RELATIONSHIPS SUCK in early 2017....I cannot wait!


Monogamy Sucks is available at Amazon US and Amazon UK. George Pappas can be found at Twitter @GPWriter
Posted by billierosie at 04:23