A COOL REVIEW OF REBELLIOUS SLAVE by ED TOMOLTA 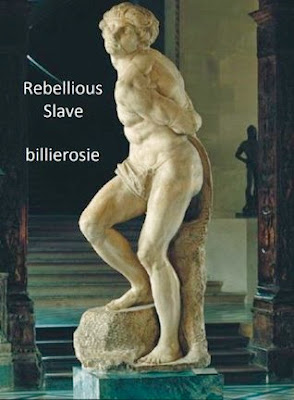 To all males that willingly, even eagerly, submit to the dominance of the female, there comes a moment in the life of the id when they, that is, WE, fantasize about a society run by alluring, erotically sophisticated and completely indomitable women. I have no doubt that there are households around the globe where the functional equivalent already exists. For the rest of men, this ultimate state of servitude remains a steamy urge nursed in private.


Perhaps more articulately than any other contemporary female erotica writer I have read, billierosie has fashioned in tight prose just such a realm. Read
her story, Rebellious Slave and you will be swept away by a tide of lust and psychological surrender to a secret society where women rule men with a will and creative genius designed to ensure that Nature is guaranteed to have Her way over vain men who in a more conventional world, hold the illusion of the upper hand.

The plot turns on what has become of Reuben, a natural submissive whose wandering eyes have betrayed him and set him on the path of ruin. But the prospect of calamity does not threaten only this lone weak male; a breach of order in The Coterie might expose the secret subculture to the enmity of the outside world. This, determines Mistress Claudia, ruler of the sect, cannot be left to chance.


In her stern elegance, with European manners and an iron will, Mistress Claudia is native to rulership over any man and fit to raise a generation of dominant women whose long training will shift the balance of power between the genders. She is coolly forceful and strategically brilliant. And she is as revered by her chosen pupils as she is feared by the men whose destinies she shapes with her confident hands and regal words. Her path of conquest is established, following a centuries-old tradition, a lineage of female supremacy that will not be unraveled over a meaningless tryst.

Then there is Melissa, Reuben's wife and a favorite in the court of Claudia. Her story, the fate of the hapless Reuben and the future of The Coterie are interwoven shrewdly by the writer. Raw eroticism is on display too as this story unfolds. The weakness that short-circuits the male mind and goads his libido into fatal mistakes is stripped bare in a seductive narrative that reveals the feverish tension between the sexes. Melissa holds a lot of promise as a dominatrix; Mistress Claudia would not waste her valuable time on a foolish girl, a poseur. But her young charge has erred badly and the implications are ominous for everyone. Bad judgment leads to bad behavior and soon, the damage is done. But is it irreparable? At Coterie HQ, the doyenne of female domination anticipates the threat and responds with her creative and uncompromising will.

Rebellious Slave is a story of the world as countless men and women already feel it in their loins. For them, it is real enough.

Rebellious Slave is also available in paperback at Amazon US and Amazon UK
Posted by billierosie at 03:14