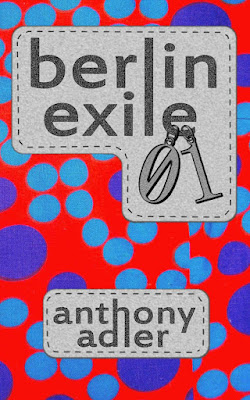 Jamie Stolts really only has himself to blame. His reputation lost, his high flying position in a prestigious public relations company gone…along with his enviable salary. He's just closed a brilliant deal with a company in Japan and he's feeling pretty pleased with himself. Jamie has just turned 30 and his 5 year plan of being a company director in the next couple of years is beginning to look like a reality.


Berlin Exile is a story of a young man's personal, emotional and spiritual growth. I don't mean spiritual in terms of a religious belief…it's more about an introspection…Jamie thinks about his behaviour and the reader starts to see a real change.


Anthony Adler’s book has a resonance of Charles Dickens’ Great Expectations. In the same way that we don't like Pip at the beginning of Great Expectations, so it is with Jamie in Berlin Exile. Okay, Jamie is fun, Anthony Adler presents him as a nice enough guy…a little superficial, a little promiscuous, he likes to be in control…but he's not without kindness. He just doesn't want to be tied down…and that's why he shuns any relationship that looks as if it's going to extend beyond one night. Told in the first person, we get to know Jamie quickly.


So, Berlin…there’s suddenly a lot going on in Jamie’s life; new people, new friends, a new love. Jamie’s work life in Berlin is refreshing to him. He feels a connection with his work; it’s not just a means to an end…he is working with good people, kind, talented people, people whom he likes and as their boss, he feels responsible for; it’s a complete contrast with what was his work life in London. The reader catches Jamie making comparisons; he thinks how unnecessary it all was to be overtly competitive, unkindly aggressive, where the reward was either a pay rise, or being noticed by “right” people.


Early in Berlin Exile Jamie talks about music, the music that to a great extent, has defined his life. He loves the great classic stuff; the Stones, the Beatles, the Who.His musical tastes are defined by nostalgia and nostalgia is always deceptive…we yearn for something to was never really there.


It's as if Jamie realized that new music was there, he just hasn't been open to it. He hasn't listened, not really. And just as Jamie is beginning to question his attitude to work and to women, he hears the music of Berlin. His musical tastes change into something profound; something esoteric. He is drawn to the enigmatic, charismatic band Null Eins Null and in an equal measure, he is drawn to the enigmatic, charismatic exotic Silke.


Berlin Exile will stay with me for a long time.

Berlin Exile is at Amazon UK And Amazon US