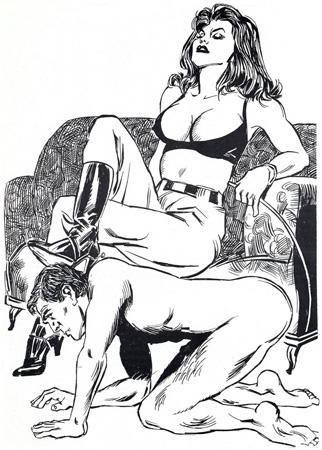 What was I doing? Exactly what they wanted. Needed. I dressed in a formal dress, high heels, pearls, sometimes an academic cape, and these men had come to see me for discipline and domination. Not the high boots, stockings and suspenders, hooker-with-a-whip type; they needed an older woman to understand them; to listen to their stories, and reenact events in their lives that they couldn’t move on from. Did their wives know? Some did. Most didn’t. Was it sexual? Some would say yes, others would deny the sexuality. In 10 years of being an English Disciplinarian… Dominatrix… Professional Mistress… (all these terms are used), my clients never once saw my underwear… maybe a cleavage, nothing more.
On the other hand, 90% of my clients were naked. Others wore appropriate clothing for their “scene”.


I had my own private rooms. I worked alone, 10:00 am to 5 pm. Strictly business hours, no weekends. The sort of men I saw were paramedics, surgeons, company directors, politicians (lots), barristers, AFL players, F1 race drivers (always busy during Grand Prix in Melbourne), and a couple of very famous group members when they were playing at the Palais in St. Kilda. School headmasters, teachers, taxi drivers, soldiers, a priest, a rabbi… Oh, I even saw a heavily tattooed bikie, bearded, cross dress! Oh yes, I had a wardrobe full of clothing just for my delightful cross dressers. Most were in the older age range. They were able to relate to me, rather than a twenty-something with no life experience.


I’m talking about the 90s, before the internet was popular. So my first advert – and I was pretty much a novice at that time – read “English disciplinarian, just arrived in Melbourne. Australian men need a damn good thrashing and I’m the one to give it to them!” In the first week I received 180 letters (which I still have!) addressed to my PO Box number. I could then pick out those that seemed genuine and respond. We met in a neutral place. One of those from that first week is still in contact with me. He’s nearly 80, and we occasionally meet up for lunch.


Initially I only saw “naughty adult schoolboys”. These were the men who had been to Catholic schools. Some had crooked fingers from the canings they’d had on their hands; some needed a good telling-off before a very formal caning. Many couldn’t function at all without a regular caning; a legacy from their schooldays. I should add that this need is not required as much these days, since the days of regular canings in schools have been over for many years. I saw myself, and still do, as a facilitator; a therapist. They arrived stressed and uptight, and left relaxed and able to get on with life.


It was theatre. “Scenes”. To be good at the job, you cannot hate men. You need empathy, and not laugh at some of the odd requests. For instance, one of my regular clients used to arrive with a bag of food, sometimes fruit, sometimes Maccas, cakes, pies. I had a rubber floor. He would lay down on the floor, fully clothed, and the food was strewn around him, and for 10 minutes I walked over him, and squashed the food, telling him I was squashing him. He would then jump up, say he’s OK now, and leave. He was well known to others in my field, so he didn’t just come to me.


One client came for severe torture. I won’t go into detail, but for two years that man had a very high pain threshold. Then one day he arrived, and he couldn’t handle any pain. He said in explanation: “my daughter has been battling cancer for two years; she is now in remission”.
One wife would phone me when her husband needed to see me. He was an adult baby, and I would put him in a baby blue romper suit, and a baby bottle. I did refuse to do any nappy changing! Another wife still asks me to see her husband and give him a good caning; she has MD and is no longer able to discipline him herself. We have become good friends, and I no longer charge. It keeps my hand in!


I could continue: so many interesting men (and some women), all highly intelligent, hard working, comfortable with their “need”, and generally men who had to be in control in their day to day lives. What they needed was, just for an hour, maybe two, to give up control to another; to get some balance.
Although I am approaching 70, I miss the interaction, the theatre, the therapy. Some of my peers are still, at over seventy, seeing the occasional client. But I am enjoying my life too much to be at the beck and call of others any more.

This blog post has been put together using sources from the Web.
Posted by billierosie at 02:46