THE TIES THAT BIND; Vanessa Duries

She was young. She was beautiful. And she was a slave. Not just any slave; a willing sex slave. 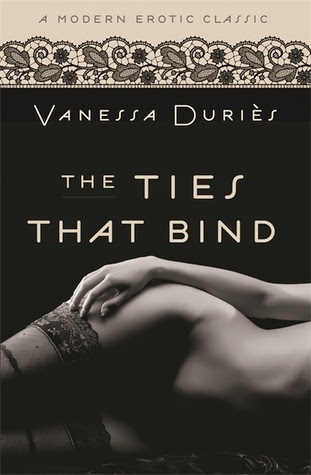 She created quite a stir in France at the time of the release of the novel, due to her youth and beauty, and appeared on national television, in particular in the show of Bernard Pivot. She also appeared in a pictorial and an interview of the May 1993 issue of the French edition of Penthouse magazine.

Here is a review of her book, from Amazon, UK

“After enduring years of corporal punishment by her father, a young and very much beautiful Vanessa realizes that `Not having the nature of an Amazon, not knowing how to oppose violence with cruelty, I learnt to dominate those who used me by making the offering of my submission both mystical and ambiguous' ...... and thus is born a female slave into the somewhat secretive world of S&M in France in the 1990's.

Right from the first chapter, `The Revelation' , the author introduces us to Pierre, her much `loved' master whom she meets at the age of twenty. In the book, without delving into any of the details of their introduction we find a young Vanessa, although apprehensive about her secret feelings, completely accept and resign herself to her `slave' state of mind and body when she visits Pierre at his countryside mansion. Although Pierre is her master, the author maintains an absolute dedication to her feelings, emotions, thrills and fears, as she is introduced and educated into the true and dedicated sadomasochistic lifestyle of a slave master relationship.

Vanessa unabashedly describes her relationship with an awe that she is living the life of total sexual and physical abandon with her much loved master. In her own words, `Pierre is an organizer beyond compare. Since sharing his life, we schedule usually quite eventful weekends throughout the year. When we return, on Sunday evenings, I often find myself in a state close to exhaustion. Pierre is no less tired than me. The role of the master is exhausting, because, while the slave only submits, the master must decide, organize, prepare and take action, all the while watching over the physical and psychic state of the slave that he has decided to honour through tests and humiliation.'

One very sad note, unfortunately, Vanessa Duriès died in a traffic accident in 1993 about seven months after the publishing of this masterwork, truly a loss from a very much talented writer.

Finally, the book has an introduction by Marie Isabel Pita one of today's hottest writers of contemporary erotica, and an afterword by Maxim Jakubowski where he briefly describes the discovery of the lost French edition of this book and his investigation into the last years of life of the author.