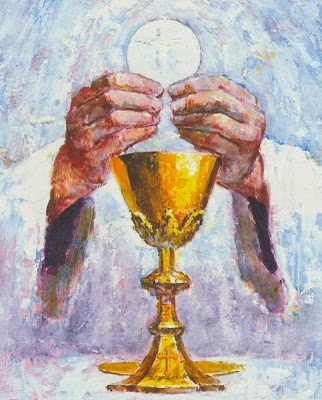 The Body of Christ
A short story by
Jan Vander Laenen


The number of communion wafers that I have ever partaken of must be roughly the same as the number of men with whom I have hitherto made homosexual love, or so I concluded last summer. It was the eve of World Gay Pride in Rome, and I lay on the bed in my hotel room, somewhere in the district of the Campo dei Fiori, thinking about my own little life in general and the unusual event of the previous day in particular.
My own little life ­ I am now forty ­ can be fairly schematically split into two halves.
The first half was characterised by a very middle-class, Catholic education in a small village in the Kempen region and a boarding school near fascist Antwerp. From age 6 to age 20, about twice a week I attended Mass there and consumed a Body of Christ, which with a little arithmetic adds up to somthing like 1,456 communion wafers.

Add to that a conservative fifty of these sacred items that I, together with other blasphemious pals, went one night and pinched from the pyx in the chapel in order to supplement our poor boarding-school fare, and we reach the round sum of 1,500. During the second half of my life, I have virtually entirely lost my interest in the Body of Christ, although I have nonetheless developed a most overwhelming passion for the bodies of less holy men.

Dwelling on this passion here is of little profit: I have probably experienced a career in love similar to that of a good many of my libertine brothers and it therefore seems to me acceptable to estimate the number of bedmates I have had at something like fifteen hundred.

And whilst in virtually all Catholic regions the Body of Christ has pretty much the same taste and consistency and in principle can only be taken in a church and in the context of the celebration of the Eucharist, the range of tastes of the bodies of other men and the places where one might sample them are naturally much more extensive and varied. The same goes for the emotions that go hand in hand with performance of the two aforementioned activities.

To the best of my recollection, I have always downed my communion wafers somewhat indifferently, or perhaps with a hint of devotion, in short a very nondescript emotion in comparison with the feelings of passion, lust, loving and subservience that my many horseplay partners have been able to wrest from me.

So much for that: these mullings are my foreword to the unusual event that happened to me last summer. I was strolling through the centre of the Eternal City and having walked past twenty-or-so monuments without regard, I was suddenly taken by an unexpected mood of devotion.

Yes, I wanted to confess, I wanted to pray to God and the Holy Virgin and to have myself cleansed by imbibing a Body of Christ. Happily, Rome ­ as everybody knows ­is just riddled with basilicas, churches and chapels, and about a hundred yards up the street I located a small, Baroque house of God in which I could assuage my religious hunger.

And so I set foot into the little church, made the sign of the cross with a few drops of holy water and went and sat on a pew at the back, as the Mass had started. And after first casting my gaze over the interior's sculptures and paintings, my eye suddenly fell on the priest, who was just magicking a chalice of wine into the Blood of Christ. He wore a chasuble. He had a full beard and a serious expression. I reckoned he was about forty. He struck me as familiar, although at that moment I could not remember at all where I might ever have met the man, and I immediately then dismissed this thought as one of those crazy notions that had frequently occurred to me in recent times.

Ten or so minutes later, as I was shuffling up the queue for my portion of Holy Bread, however, I got a clearer look at the man, and as I eventually stood plum in front of him, looked at him and stuck my tongue out, I thought I could read something akin to amazement in his eyes. Indeed, he was staring at me in wonder, wafer in hand, and for a long moment he stood in this position, as though turned to stone.
'Hello, Jan, how's things?' he eventually said to me in Dutch, at which he gathered himself, murmured 'body of Christ' and with trembling hand laid the wafer on my tongue.

I went and drank a Campari after the Mass, and it was at the pavement cafe that, having racked my brains for ten minutes that the priests' name suddenly dawned on me: Paul Van Gelder.

Well I never, Paul Van Gelder, it was a long time ago, in Brussels, both of us twenty and gay and each not daring to admit it to the other. And all the trouble we went to all those evenings in the student bars round Sint-Gorik's Square to avoid the subject, whilst we were both head over heels in love with one another.

And so on until that evening, that dark November night when you stood unexpected before the door of my study. I let you in, you took me in your arms and changed my mind with a French kiss as passionate as it was long. After this, you took your leave of me and with wavering voice told me that you would be going away from Brussels the next day to start training as a priest.

And so, Paul Van Gelder, you really did become a priest and, as fate had it, twenty years later our paths momentarily crossed again, in Rome, and in a church to boot, in the Holy Year and the day before World Gay Pride. Thanks, Paul Van Gelder, you gave me the most cleansing Body of Christ ever in my sinful existence.

“Matthew 26:26-28: Now as they were eating, Jesus took bread, and blessed, and broke it, and gave it to the disciples and said, "Take, eat; this is my body." And he took a cup, and when he had given thanks he gave it to them, saying, "Drink of it, all of you; for this is my blood of the covenant, which is poured out for many for the forgiveness of sins.”

Jan loves to hear from his readers. You can email him at jan.vanderlaenen@skynet.be;


"Transubstantiation" is the official Roman Catholic concept referring to the change that takes place during the sacrament of Holy Communion (Eucharist). This change involves the substances of bread and wine being turned miraculously into the substance of Christ himself. The underlying essence of these elements is changed, and they retain only the appearance, taste, and texture of bread and wine. Catholic doctrine holds that the Godhead is indivisible, so every particle or drop thus changed is wholly identical in substance with the divinity, body, and blood of the Saviour.
Posted by billierosie at 03:40