THE PORNOGRAPHIC ART OF AUBREY BEARDSLEY 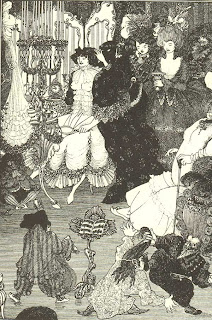 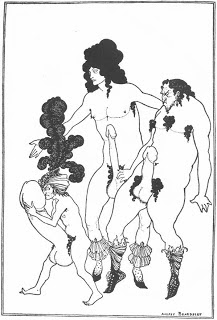 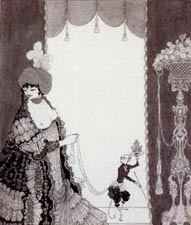 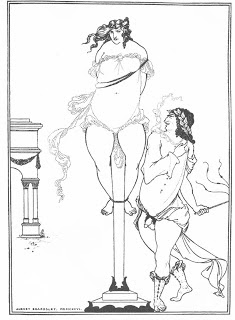 In February 1893, Wilde's scandalous play Salome was published in its original French version. An illustration inspired by the drama (reproduced in Joseph Pennell's article, "A New Illustrator: Aubrey Beardsley," in the inaugural issue of The Studio) was admired by Wilde and Beardsley was commissioned 50 guineas to Illustrate the English edition. This assignment was the beginning of celebrity but also of an uneasy, and at times unpleasant, friendship with Wilde, which officially ended when Wilde was tried and convicted of sodomy in 1895.

Beardsley's fame was established for all time when the first volume The Yellow Book appeared in April 1894. This famous quarterly of art and literature, for which Beardsley served as art editor and the American expatriate Henry Harland as literary editor, brought the artist's work to a larger public. It was Beardsley's stark black-and-white drawings, title-pages, and covers which, combined with the writings of the so-called "decadents," a unique format, and publisher John Lane's remarkable marketing strategies, made the journal an overnight sensation. Although well received by much of the public, The Yellow Book was attacked by critics as indecent and obscene. So strong was the perceived link between Beardsley, Wilde, and The Yellow Book that Beardsley was dismissed in April 1895 from his post as art editor following Wilde's arrest, even though Wilde had in fact never contributed to the magazine.

This blog post was compiled using sources from the web.
Posted by billierosie at 05:19