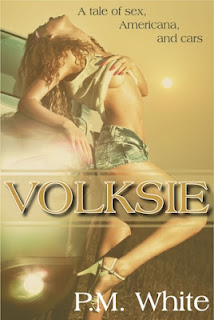 When does a love of something become an obsession? When do we make the step from being a mere collector of say postage stamps, road maps, matchboxes, dolls, toy cars, to having an overwhelming passion for something? A passion that drives your very existence -- you are so driven that you seek the same passion when choosing a mate.

Some people with such obsessions, search their whole lives and heartbreakingly most of them fail. But it doesn’t matter; their obsession sees them through.

To the outsider, people with obsessions seem strange. I’m not talking about people with mere hobbies. Mere collectors; dabblers and geeks. This is a passion that celebrates your absolute reason to be.

And P.M. White has written about such folk in his novella, “Volksie”

Who’d have thought that it was possible that some people obsess about a VW Beetle? A strange little motor vehicle that a lot of people find comical. The image that most of us have of the VW Beetle is of Herbie, the comic little anthropomorphic car of the 1960’s movie. Some see the VW as something more sinister; Adolf Hitler’s peoples’ car.

Not according to P.M.White’s carefully crafted characters. They love their VW Beetles with a passion that borders on the metaphysical.

Through his novella Volksie, PM White presents the reader with a dysfunctional family; A drifter brother, Alston. An absent father. Mother has an aggressive tumour; she also has a menagerie of animals. And there is Samantha, and Samantha is addicted to sex.

Sex from PM White is a joyous celebration; the images dance and shimmer.

But Samantha is not the focal point of this story. It is through her that we learn of her drifter brother, Alston.

Address: “Somewhere in Arizona.” As she reads Alston’s rare letter Samantha’s thoughts turn to childhood and the passion that her brother had for “Slugbugs;” a term of endearment for a VW Beetle. Alston speaks of a woman he has met. “Volksie”. She is his soul mate; the love of his life, even though they were only together for a few brief hours. Then she is gone. Alston knows that she and he are meant to be together when they realise that they both wear identical necklaces; tiny images of a VW Beetle. Alston is determined to find her.

It is a tale following the theme of the hunter and the hunted. When Alston finds his Volksie, she is on the run. Alston soon realises that because of an unpaid debt, bad men are looking for him and he’d better be on the run too. The pace picks up as PM White takes us on a gasping for breath trip through the hot air of Nevada and Arizona, shifting seamlessly from one point of view to another.

The narrative is punctuated by sex. Samantha having sex; sex with a woman. Sex performed live online. An exhibitionist’s display of sex with three Latinos beneath the pier on the beach. Always watched by Gary, the voyeur. The action turns to Alston and Volksie. There is sex with a VW, sex in several VWs. Alston and Volksie become fascinated voyeurs in an episode with two guys having sex close to a VW.

Through Alston’s letters, Samantha is drawn back to their childhood and her brother’s dangerous adventures. Always living on the fringes of society and always involving a VW Beetle. The VW relentlessly driving the narrative forward.

Time shifts through the brother’s and sister’s eyes.

The grungy bars that PM White writes about are as American as an Edward Hopper painting. With lyrical sentences, made up of carefully selected words, PM White paints the American landscape. The red rocks of the Grand Canyon shimmer in the gusts of wind at the viewing point. The dry, dusty desert becomes a place of stunning beauty in the writer’s hands.

I know that this is a story that will stay with me for years. “Volksie” is at times heartbreakingly funny and at other times, poignantly sad.

Read “Volksie” and you might weep, you’ll almost certainly laugh. You will definitely be allured; Volksie is the most erotically charged piece of writing I have read in a long time.

Published by 1001 nights press, Volksie is available at Amazon UK and Amazon US.