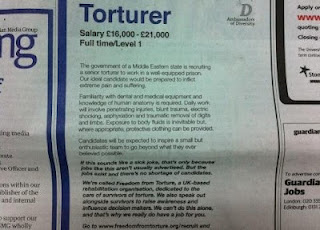 “The government of a Middle Eastern state is recruiting a senior torturer to work in a well-equipped prison. Our ideal candidate would be prepared to inflict extreme pain and suffering. Familiarity with dental and medical equipment and knowledge of human anatomy is required. Daily work will involve penetrating injuries, blunt trauma, electric shocking, asphyxiation and traumatic removal of digits and limbs. Exposure to body fluids is inevitable but, where appropriate, protective clothing can be provided. Candidates will be expected to inspire a small but enthusiastic team to go beyond what they ever believed possible.”


As you’ll have hopefully of gathered by now (!) the ad is a hoax. In fact, the real recruiter is Freedom from Torture, a charity which is looking for donors and campaigners and attempting (quite successfully) to make some noise with this stunt. The charity helps torture victims with medical, psychological and practical help in London, Birmingham, Glasgow, Manchester and Newcastle.


At his Telegraph blog, Daniel Knowles praised the “clever hook” and reminded how serious an issue the ad highlights. He argued that “the Middle Eastern state ‘recruiting’ in this advert could be almost any in the region. Syria, Iran, Saudi Arabia and Bahrain spring to mind. Not to mention non-governmental torturers, like Hezbollah, or the various militia in Iraq, or Hamas in the Gaza Strip. Or the distinctly worrying state of the post-Arab Spring regimes in Egypt and Libya. When we talk about asylum seekers, we should keep in mind that many are victims of people who do exactly this ‘job’. The victims of torture, wherever they end up, need support – and when they arrive in Britain, we owe them a duty of care.”
Posted by billierosie at 12:49