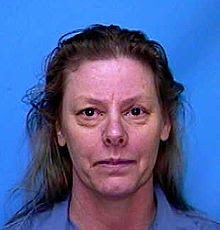 Aileen Carol Wuornos (29th February 1956 – 9th October 2002) was an American serial killer who killed seven men in Florida between 1989 and 1990, claiming they raped or attempted to rape her while she was working as a prostitute. She was convicted and sentenced to death for six of the murders and executed by lethal injection on 9th October 2002.

Aileen had an awful start in life. Right from her childhood, she was abandoned and abused. She was born as Aileen Carol Pittman in Rochester, Michigan, on 29th February 1956. Her mother, Diane Wuornos, was 15 years old when she married Aileen's father, Leo Dale Pittman on 3 June 1954.

Less than two years later, and two months before Aileen was born, Diane filed for divorce. Aileen had an older brother named Keith, who was born in February 1955. Aileen never met her father, because he was in prison for the rape and the attempted murder of an eight-year-old boy when she was born. Leo Pittman was considered to be a schizophrenic, who was convicted of sex crimes against children, He was constantly in and out of prison, and hanged himself in prison in 1969. In January 1960, when Aileen was almost 4 years old, Diane abandoned her children, leaving them with their maternal grandparents, Lauri and Britta Wuornos, who legally adopted Keith and Aileen on 18th March 1960.

At age 12, Aileen engaged in sexual activities in school in exchange for cigarettes, drugs, and food. She also engaged in sexual activities with her brother. Aileen claimed that she was sexually assaulted and beaten as a child by her grandfather. Aileen's grandfather was an alcoholic. Before beating her, he would force her to strip out of her clothes.

In 1970, at age 14, she became pregnant, having been raped by a friend of her grandfather. Aileen gave birth at a home for unmarried mothers, and the child was placed for adoption. A few months after her baby was born, Aileen dropped out of school when her grandmother died of liver failure. Aileen and her brother became wards of the court. When she was 15, her grandfather threw her out of the house; and she began supporting herself as a prostitute and living in the woods near her old home.

On 27 May 1974, when she was 18, Aileen was arrested in Jefferson County, Colorado, for driving under the influence disorderly conduct, and firing a .22-caliber pistol from a moving vehicle. She was later charged with failure to appear.

In 1976, Wuornos hitchhiked to Florida, where she met 69-year-old yacht club president Lewis Gratz Fell. They married that same year, and the announcement of their marriage was printed in the society pages of the local newspaper. However, Aileen continually involved herself in confrontations at their local bar and eventually went to jail for assault. She also hit Fell with his own cane, leading him to get a restraining order against her. She returned to Michigan, where, on 14 July 1976, she was arrested in Antrim County, Michigan, and charged with assault and disturbing the peace for throwing a cue ball at a bartender's head. On July 17, her brother Keith died of esophageal cancer and Aileen received $10,000 from his life insurance. Aileen and Lewis Fell annulled their marriage nine weeks later. On 20 May 1981, Aileen was arrested in Edgewater, Florida, for the armed robbery of a convenience store. She only got $35 and two packs of cigarettes. She was sentenced to prison on 4 May 1982, and released on 30 June 1983. On 1 May 1984, she was arrested for attempting to pass forged checks at a bank in Key West. On 30th November 1985, she was named as a suspect in the theft of a revolver and ammunition in Pasco County.

On 4th January 1986, she was arrested in Miami and charged with  resisting arrest, and obstruction by false information for providing identification with her aunt's name. Miami police officers found a .38-caliber revolver and a box of ammunition in the stolen car. On 2nd June 1986, Volusia County, Florida deputy sheriffs detained her for questioning after a male companion accused her of pulling a gun, in his car, and demanding $200. She was found to be carrying spare ammunition, and a .22 pistol was discovered under the passenger seat she had occupied.

Around this time, Aileen met Tyria Moore, a hotel maid, at a Daytona gay bar. They moved in together, and Aileen supported them with her prostitution earnings. On 4 July 1987,Daytona Beach police detained Aileen and Tyria at a bar for questioning regarding an incident in which they were accused of assault and battery with a beer bottle. On 12 March 1988, Aileen accused a Daytona Beach bus driver of assault. She claimed that he pushed her off the bus following a confrontation. Tyria Moore was listed as a witness to the incident.

Between December 1989 and September 1990, the bodies of several men were found murdered along the highways of northern and central Florida, including Richard Mallory, Dick Humphreys, Troy Burress, David Spears, Walter Gino Antonio, Peter Siems, and Charles Carskaddon. Items belonging to Mallory and Antonio were pawned near Daytona Beach and the alias names used were traced to Aileen through thumbprints left on the pawn shop cards. Aileen confessed to the murder of all six men, claiming that she was picked up by the men when she was working as a highway prostitute, and shot them in self defence after they attempted to sexually assault her. She was convicted of the murder of Richard Mallory after a jury trial in Volusia County and was sentenced to death. While on death row, it was discovered that Mallory had previously served time for Attempted Rape. Aileen pleaded no contest to the murders of the other 5 men and was sentenced to death in each case.

Within two weeks of her arrest, Aileen and her attorney had sold movie rights to her story. Investigators in her case did likewise. The case resulted in several books and movies, and even one opera on the life of "America's first female serial killer.

She has been heralded in tabloid headlines and on television talk shows as Americas first female serial killer. In fact, Aileen Wuornos was neither the first nor the worst, although she did display a curiously masculine tendency to prey on strangers of the opposite sex. Suspected of at least seven murders, sentenced to die in four of the six cases she confessed to police, she still maintained that some, or all of her admitted killings were performed in self-defence, resisting violent assaults by men whom she solicited while working as a prostitute. Ironically, information uncovered by investigative journalists in November 1992 suggests that in one case, at least, her story may well be true.

Aileen’s appeal to the U.S. Supreme Court was denied in 1996. In 2001, she announced that she would not issue any further appeals against her death sentence. She petitioned the Florida Supreme Court for the right to fire her legal counsel and stop all appeals, saying,

"I killed those men, robbed them as cold as ice. And I'd do it again, too. There's no chance in keeping me alive or anything, because I'd kill again. I have hate crawling through my system...I am so sick of hearing this 'she's crazy' stuff. I've been evaluated so many times. I'm competent, sane, and I'm trying to tell the truth. I'm one who seriously hates human life and would kill again."

Florida Governor Jeb Bush instructed three psychiatrists to give Aileen a 15-minute interview. The test for competency requires the psychiatrist to be convinced that the condemned person understands that she will die and for which crime she is being executed. All three judged her mentally fit to be executed.

In a final interview Aileen said;
"You sabotaged my ass, society, and the cops, and the system. Her final words in the on-camera interview were "Thanks a lot, society, for railroading my ass."

Nick Broomfield, who directed a film about Aileen’s life; later met Dawn Botkins, a childhood friend of Aileen, who told him, "She's sorry, Nick. She didn't give you the finger. She gave the media the finger, and then the attorneys the finger. And she knew if she said much more, it could make a difference on her execution tomorrow, so she just decided not to.


Aileen, was brought into the death chamber on October 9, 2002. She had declined a last meal and instead was given a cup of coffee.

After her execution, Wuornos' body was cremated. Her ashes were taken by Dawn Botkins to her native Michigan and spread beneath a tree. She requested that Natalie Merchant's song "Carnival" be played at her funeral. Natalie Merchant commented on this when asked why her song was played during the credits of the documentary Aileen: Life and Death of a Serial Killer:

“When director Nick Broomfield sent a working edit of the film, I was so disturbed by the subject matter that I couldn't even watch it. Aileen Wuornos led a tortured, torturing life that is beyond my worst nightmares. It wasn't until I was told that Aileen spent many hours listening to my album Tigerlily while on death row and requested "Carnival" be played at her funeral that I gave permission for the use of the song. It's very odd to think of the places my music can go once it leaves my hands. If it gave her some solace, I have to be grateful.”

“I think this anger developed inside her. And she was working as a prostitute. I think she had a lot of awful encounters on the roads. And I think this anger just spilled out from inside her. And finally exploded. Into incredible violence. That was her way of surviving. I think Aileen really believed that she had killed in self-defence. I think someone who's deeply psychotic can't really tell the difference between something that is life threatening and something that is a minor disagreement. Her psychosis could kick in if you said something that she didn't agree with. She would get into a screaming black temper about it. And I think that's what had caused these things to happen. And at the same time, when she wasn't in those extreme moods, there was an incredible humanity to her.”

From Wiki.
Posted by billierosie at 05:05