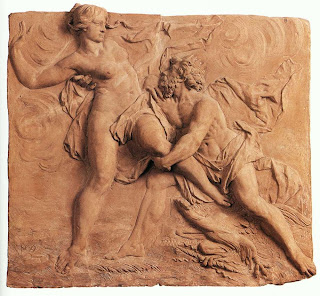 Rape: an insidious little word. Those four letters, in that order, conjure up a variety of emotions. We’ve an unwritten, unspoken contract, drawn up between ourselves, about what words convey to us. What they signify. Rape, signifies violation, an abuse of strength and power; total disrespect for another. It is selfishness at its most extreme. “I want that -- and I will have it!” 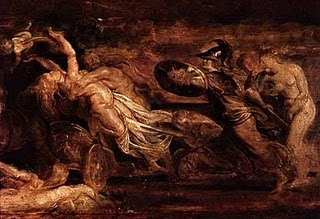 The word rape itself originates from the Latin verb rapere: to seize or take by force. To us, it is much more than that. It connotes fear, anger, guilt, shame. Sadly, those emotions are burdens, carried by far too many people.

We talk about “victims of rape.” So why is rape a favourite fantasy of so many people? Why do artists paint pictures of rape? Why do writers of erotica write their carefully crafted rape stories? Why is a word that conveys that a violation, a heinous crime has taken place such a turn on? Why do we find the paintings and stories so arousing? We know exactly what is going on; yet still we look at the pictures and read the stories.

The tale of Persephone is a favourite subject for artists. Here is her story. She was abducted by Hades and starved into submission.

The god Poseidon raped the goddess Demeter. From their union the beautiful Persephone was born. In the days when gods and goddesses walked on the Earth, the three most powerful gods were brothers. Zeus was ruler of the sky, Poseidon was god of the sea and Hades was the Lord of the Underworld.

The Underworld was Hades realm. It is where we get our ideas about hell. The Greeks believed absolutely in the Underworld; a terrible place, a place without light, where the spirits of the dead went. Having entered the Underworld, and having eaten there, no-one was allowed to re-enter the world of the living.

Hades visited Earth and rode past Persephone while she was gathering flowers in a field. He was dazzled by her beauty. He wanted her. And being one of the three most powerful gods, he kidnapped her and drove off in his chariot.

Persephone’s abduction was horrific. She was pinned to the floor of Hades' chariot while he drove faster and faster, down and down, into the darkness of the underworld. In the black halls of Hades, Persephone crouched and cried, refusing all food, refusing to speak to the god who had snatched her away.

Days passed. Persephone's hunger grew. At last she could resist no longer, she ate six pomegranate seeds and, having eaten, she could not return to the world above.

Meanwhile, her Mother, the goddess Demeter, grew distracted. Demeter was the ancient Greek goddess of grain, fertility and the harvest. She knew what had happened but she could do nothing. She raged all the more because she was powerless against Hades. She went to Zeus, the king of gods, and she begged him to bring about Persephone's return. Zeus could not bear Demeter's crying. Her tears were destroying the harvest. The earth became scorched and blackened. 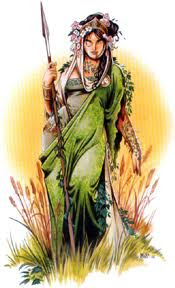 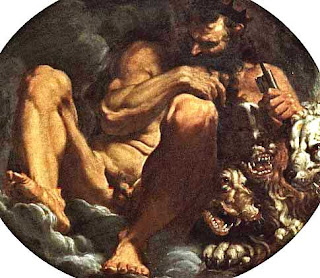 And this is what happened. While Persephone lives in the underworld, the days are short and dark and cold. But with her return to Earth in the spring, the flowers start to bloom, the leaves to bud, and the birds sing in the sky.

There are plenty of instances of sexual violation in the Greek myths, but in the Persephone/Hades myth, the writers substitute the actual sexual violation, with Persephone eating the six pomegranate seeds. I don’t know why that is. It isn’t as if the tellers of those old stories are shy. Poseidon rapes Medusa, violating her, so that she is unworthy to be Athene’s priestess. Zeus turns himself into a swan and rapes Leda. And there are many more examples of what is quite plainly a vicious violation, so why sanitise Persephone’s rape with the consumption of seeds? I have no idea -- but it’s a great story.

And yes, I do watch the Soaps, and “Coronation Street” is running an incredible “Rape” storyline at the moment. Carla, who owns the lingerie factory, has jilted her fiancé, Frank, the night before they are to marry. Frank lets himself into her apartment and brutally rapes her. I watched the episode, and it really was horrible. Frank hasn’t even committed the disgusting crime out of revenge. It’s out of petulance; he’s like a peevish three year old, who can’t get his own way. A three year old’s psyche in a man’s body, with a man’s strength -- that is dangerous.

When the Soaps take on an issue as big as this -- they do it so well. They have to -- research has been meticulous, from the way the police handled Carla’s accusations, to the aftershock effect that Carla experiences. Women and men, all over the country, people who have been through this revolting experience will be scrutinising the storyline. The writing is great, pace, and the subsequent tension, perfect -- it crackles.

But I, and lots of other women, and men, still have rape fantasies. I’ve enough in my life to feel regretful about, I’m not going to start feeling guilty about a fantasy. And there’s a huge gulf between fantasy and reality; it’s keeping a perspective on it that matters.

Carl Jung informs us that we need myth, and the stories that we tell ourselves through our fantasies. He teaches us that myth originates and functions to satisfy the psychological need for contact with the unconscious--not merely to announce the existence of the unconscious, but to let us experience it.

Persephone and Hades are symbolic keys to truths about human condition. They are far more than recognizable characters, they are learning tools, lessons from primordial time.

“Our dreams and fantasies are age-old mythological influences. Deriving from our remotest ancestors, they slumber in all of our unconscious memories which awaken at night and seek to compensate the false attitude modern men and women have towards our nature.”

Has anyone else out there, woken in the morning in a stupor of amazement at where their darkest desires have taken them in the night?

Myth serves as inspiration. The language of myth is profound in its imagery. Persephone and Hades are powerful forces within us. They are a god and goddess from ancient times.

We need the terrifying hoof beats of Hades’ horses pounding down on us. We need to lose ourselves in Persephone’s desperate screams. They are more than just archetypes.

Jung points out the emotional attraction of the stories, but explains it as a resonance from within the human mind, an inner recognition of the hidden truth that the stories contain.

Why does mythology speaks to us? I remember reading Pasiphae's story. The Queen of Crete who contrived to have sex with a bull. Bestiality, another taboo. I was around 10 or 11 when I read that story; I remember feeling strangely excited. I didn’t understand the story, not really, and I didn’t understand my reaction to it. Not only did Queen Pasiphae do it, but she liked it. She relished it.

I used to think my masochistic fantasies, again I was very young -- I used to think they were all my own. And then I started reading about submissives' stories in Erotica anthologies. Other people had the same dark desires -- they were even turned on by the same imagery as me. Used the same language as me.

We have to give the archetypes their time in the spotlight, Jung would say - including the Persephone/Hades archetype and Pasiphae too - because they are a powerful part of us all. But we do it safely and sanely through art and fantasy.
Posted by billierosie at 08:56