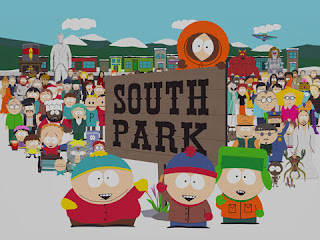 I think that South Park is one of the great satires of our time. It is in the tradition of Swift and Hogarth, and the Italian Commedia dell’Arte, in commenting, and ridiculing contemporary events and figures. We need satire to remind us that those high up on the social scale, whether they are Kings and Queens, Politicians or just adults in authority, are the same as us, the regular mortals out on the street. Kings and Queens piss, shit, fart and throw up; they are no different to us and satire nudges us, to remind us of this undeniable fact.

For satire to work, it has to be immediate, and with true dedication to the genre, episodes of South Park are typically written and produced during the week preceding the show’s broadcast.

South Park is an American animated sitcom created by Trey Parker and Matt Stone for the Comedy Central television network. Intended for mature audiences, the show has become famous for its crude language, surreal, satirical, and dark humour that lampoons a wide range of topics. The ongoing narrative revolves around four boys—Stan Marsh, Kyle Broflovski, Eric Cartman and Kenny McCormick—and their bizarre adventures in and around the town of South Park.

Parker and Stone, who met in college, developed the show from two animated shorts they created in 1992 and 1995. The latter became one of the first Internet viral videos, which ultimately led to its production as a series. South Park premiered in August 1997 with great success, consistently earning the highest ratings of any basic cable program. Subsequent ratings have varied, but the show remains Comedy Central's highest rated and longest running program. Originally produced by cutout animation, each episode is now created with computer software that emulates the show's distinct style. After the first couple of seasons, Parker became the only credited director, and the only writer for the majority of the past four seasons. As of 2011, a total of 216 episodes have aired during the show's fifteen seasons. Parker and Stone are under contract to produce 14 new episodes in 2011. The fifteenth season premiered on April 27, 2011.

I want to look at the episode where the show’s writers lampoon religion. It is Jesus vs. Satan. 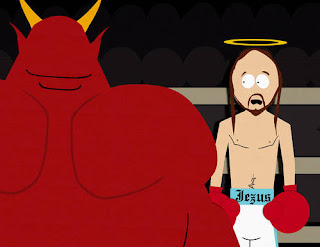 "Damien" is the eighth episode of the first season of the animated television series South Park. It originally aired on Comedy Central in the United States on February 4, 1998. In the episode, the boys' class is joined by a new student named Damien, who has been sent by his father Satan to find Jesus and arrange a boxing match between the two. The majority of South Park residents bet on Satan to win the match due to his enormous size and muscular physique, but Satan ultimately throws the fight and reveals he bet on Jesus, thus winning everybody's money.
The episode was written by series co-founders Trey Parker and Matt Stone, along with writer Brian Graden. It was directed by Parker, and was rated TV-14-LV in the United States for strong to extreme language & bloody violence. The episode serves as a satire on religion, faith and the nature of good and evil, as well as a commentary on commercialism, the cult of celebrity in America and the nature of children. It was originally written as a Christmas special, but the original broadcast was pushed forward when Parker and Stone decided instead to make "Mr. Hankey, the Christmas Poo" the season's holiday episode. 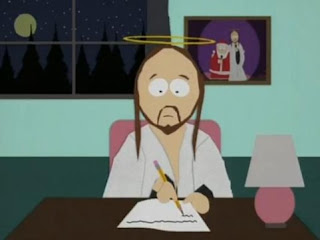 "Damien" received generally positive reviews and was viewed by 3.2 million households when it was first broadcast, making it the highest rated cable program the week it aired. The episode marked the first appearance of Satan, who would become a recurring South Park character, as well as the character of Damien himself, who was inspired by the antagonist of the 1976 horror film, The Omen. Parker and Stone also said the episode introduced several key characteristics of the Cartman character that have endured throughout the rest of the series. Michael Buffer, the boxing ring announcer best known for the catchphrase, "Let's get ready to rumble!", makes a guest appearance in "Damien" as himself.

Then there’s the “chickenpox” episode, where the boys take revenge on their parents for trying to get the kids infected with chickenpox.

In this episode, chickenpox begins to spread throughout South Park, and infects Stan's sister Shelley and Kenny; though the boys are not sickened by it (it is a form of herpes, they discover), the moms begin to think that maybe the other boys should be exposed to it too, so as to get it while they are young and it is easier to deal with. They agree, and the other boys stay over at Kenny's house. The boys are less than enthusiastic about spending the night over at Kenny's because he is so poor. The dinner is a meagre waffle per person with no side dishes. The next day, Cartman and Stan get sick, but not Kyle. Stan's chickenpox gets so bad he has to be brought to the hospital with Shelley.

Stan breaks out of the hospital, and all of the boys go to try to get revenge on the adults for what they did; they do this unaware that Stan is so sick that he might die. The parents begin a frantic search, while the boys go see Old Frida, a local prostitute with herpes in her mouth, who they pay to go to their homes and lick, touch and otherwise mess with the parents' stuff to give them all herpes. The parents find them and bring them back to the hospital; at this point Kyle finally falls ill and passes out on the floor, making Sheila realize what a horrible thing she has done.

All the boys wind up in the hospital, and the parents get herpes, which they agree was a fair idea for what they tried to do. They all have a laugh about it.
"Big Gay Al's Big Gay Boat Ride" is the fourth episode of first season of the animated television series South Park. It originally aired on September 3, 1997. The episode was written by series co-founders Trey Parker and Matt Stone, and directed by Parker. In this episode,Stan's dog, Sparky, is assumed to be gay after humping a rival male dog. Bowing to social pressure, Stan tries to make him more masculine, and as a result, Sparky runs away and ends up at Big Gay Al's Big Gay Animal Sanctuary. Stan comes to understand homosexuality and tries to make everyone in South Park accept it. 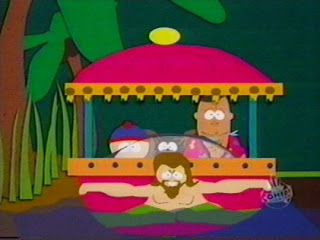 "Big Gay Al's Gay Boat Ride" addressed open homosexuality in a way that was uncommon for television at the time, which created some anxiety among Comedy Central executives. The network initially objected to offensive remarks made by sports commentators in the episode, but the comments were kept in at the insistence of Parker and Stone. George Clooney made a guest appearance as Sparky, a throwaway part with no dialogue except for dog barks.
SPARKY

The episode marked the first appearance of Big Gay Al and generally received positive reviews for its portrayal of homosexuality. Creators Stone and Parker considered it their favourite episode of the first season, noting that it helped elevate the credibility and relevance of South Park during its early days. It was nominated for both an Emmy Award for Outstanding Animated Program and a GLAAD Award, and was the episode submitted when South Park won a CableACE Award for outstanding animated series.

Due to restrictions on copyright, I am unable to download any episodes, or clips from South Park; but here are the two writers, Trey Parker and Matt Stone, talking about it.