The Art of Jean-Léon Gérôme 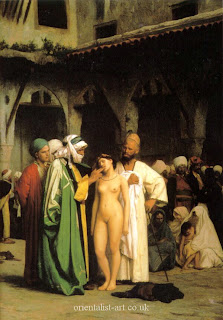 
Jean-Léon Gérôme (11 May 1824 – 10 January 1904)
was a French painter and sculptor in the style now call Academicism. The range of his work included historical painting, Greek mythology, Orientalism, portraits and other subjects, bringing the Academic painting tradition to an artistic climax. WIKI.


His painting, “Slave Market”, is lyrical; it has a narrative, it tells a story. The viewer forms the story in his own mind. Transfixed, the viewer gazes at the lovely image of the naked woman. The viewer asks a series of questions. What is going on here? Who is the woman? Is she really going to be sold; bought by an unknown man? The same man might go on to another market and purchase a cow, a pig, a horse. The naked female is going to be someone’s property to do with as he wishes. She is for his consumption. He can flog her, have sex with her when he chooses. She will not have any legal right to refuse him.


The viewer is a voyeur; excited and watching.


A group of men in Arabian dress, surround her; one examines her teeth. I think that this is a visual metaphor which places her on a level with an animal. It is the traditional way to assess a horse’s age, by looking at his teeth. The woman is submissive; her nudity is emphasised by the fact that everyone else in the painting is clothed. She appears drugged; she seems to sway sleepily. She gazes seductively, languorously at the Arabian man. She is ready for sex, she is one step away from rubbing her genitalia against the prospective buyer’s thigh.


Was Gérôme present at such an event as a slave market? We don’t know; but he was well travelled in the Orient. He travelled to Constantinople, in 1853.This would be the first of several travels to the East; in 1854 he made another journey to Turkey.


His paintings of the Orient are atmospheric, suggesting exotic scents and sounds. The Orient is mysterious; sensual. 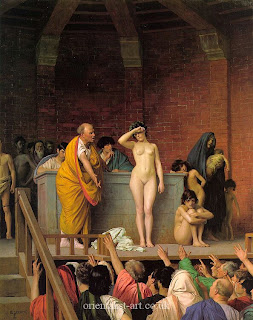 
In this painting, the nude woman up for sale seems slightly more with it. She holds an arm in front of her face to hide her shame. Any sex that is going to happen, after her new owner takes her to his harem, will not necessarily be consensual. It will be rape. 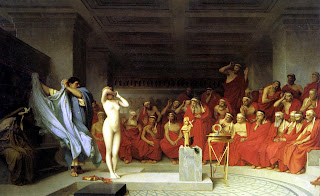 PHYRNE BEFORE THE AREOPAGUS


The Greek myth tells us that Phyrne was famously beautiful. On the occasion of a festival of Poseidon at Eleusis, she laid aside her garments, let down her hair, and stepped naked into the sea in the sight of the people.  When accused of profaning the Eleusinian Mysteries, she was defended by the orator Hypereides, one of her lovers. The speech for the prosecution was written by Anaximenes of Lampsacus according to Diodorus Periegetes. When it seemed as if the verdict would be unfavourable, Hypereides tore open her robe and displayed her breasts, which so moved her judges that they acquitted her. According to others, she herself removed her clothing. The judges' change of heart was not simply because they were overcome by the beauty of her naked body, but because such unusual physical beauty was often seen as a facet of divinity or a mark of divine favour during those times. WIKI


Phyrne is hiding her face at her sudden theatrical exposure; there is a certain dramatic pause about the gesture. Faux modesty? It is a moment of pure drama; it is meant to be. But it is her face that she hides, not her body. It’s as if she knows the power that her fabulous body has over men. The faces and postures of the judges, suggest a moment of numinous awe. As if they are in the presence of something holy.


It appears that Gérôme had a complex relationship with the Orient. Is he recording a truth here in these paintings; or is he suggesting a fantasy? Exposure and humiliation can be just as much a female fantasy, as it can be a male. Wanting to be displayed and humiliated is a fantasy of submissives, as it is a fantasy of a Dominant, who dreams of being in control. Rape, torture and pain, as well as humiliation are on his/her mind.


And we don’t know Gérôme’s own mind on this. Perhaps he was turned on by his paintings. "Orientalism" is more widely used to refer to the works of the many 19th century artists, who specialized in "Oriental" subjects, often drawing on their travels to North Africa and Western Asia. Artists as well as scholars were already described as "Orientalists" in the 19th century, especially in France.


There was also a fascination with the Orient across the English Channel, with the Romantic movement there. A few weeks ago, I was talking about Samuel Taylor Coleridge’s poem, Kubla Khan. Gérôme’s paintings of slave girls echo the drama and mood of the poem, with its swaying, drowsy use of language.


“Weave a circle ’round him thrice,
And close your eyes in holy dread:
For he on honeydew hath fed,
And drunk the milk of Paradise!”

“Perfectly painted, with an absolute precision of line and a masterly use of colour, Gérôme’s works, despite the academic nature of his subjects and compositions, established a more complex relationship with modern art than might seem to be the case at first sight. This issue has been the subject of recent attention on the part of art historians when reassessing Gérôme’s work and artistic personality. He combined the Romantic interest in reproducing subjects from the classical world, the Far East and even French history with a rationalist desire to offer a truthful account, with the latter intention even prevailing over the need to make the composition intelligible and leading him to infringe academic norms on occasions”. WIKI


Gérôme was one of the most famous painters of his day, although he was also the subject of criticism and controversy throughout his career. His popularity was largely the result of his careful promotion of his works, which became known beyond the frontiers of France and even reached the United States where he was one of the most admired and collected artists from the 1870s onwards.


The fact that Gérôme’s work was so well known in the United States undoubtedly contributed to its role as a source of inspiration for some major Hollywood films. It is this dual nature of his output, at once both scholarly and popular, that makes it so important and appreciated today, both on the part of art historians and the general public.


“Art historians commonly describe Gérôme's paintings as cinematic, and his works have in fact inspired many film adaptations. Widely circulated as prints and photographs, these pictures achieved a global celebrity status by the end of the 19th century. Thus, when early filmmakers referenced these images in their films, they knew that audiences would recognize them.


Gérôme continues to influence filmmakers to this day. In this lecture, Marc Gotlieb, director of the graduate program in the history of art at Williams College, introduces Jean-Léon Gérôme's paintings through the lens of modern cinema. This perspective—characterized by Hollywood and its approach to storytelling and suspense—brings to life pictures that once captivated the attention of audiences across Europe and the United States, even as those pictures were anathema to Modernist aesthetics.”
From Gérôme's Cinematic Imagination. The Getty Centre.


Sad isn’t it? It shouldn’t be like that -- but it is. Yet Gérôme is showing us a strange fiction of the “Other” that gives the West a valuable territory of fantasy and desire, which I think is still valid in the 21st century.


“Today the West is bleakly incurious about the history of Islam, its cultural heritage, its art, peoples and learning. There's a blank wall of terror.”
Jonathan Jones Thursday 22nd May 2008. The Guardian newspaper.

Jonathan Jones’ is actually talking about a book that he’s reviewing but his comment seems pertinent here. Our fears have dulled our curiosity. The “Other” has found a different face and it frightens us.


Well -- given the world events of the last ten years, this was bound to happen. The West is fearful. Our curiosity is stunted and yet the Orient still has a history and a culture that shimmers with difference and beauty.


The Orient had written language, while we were still scratching our heads trying to work out whether or not the wheel would work.

As for the concept of the Orient itself, we have the wonderful paintings of Jean-Léon Gérôme to remind us of that mysterious, soul enriching culture and its history.

Thanks to Jan Vander Laenen for introducing me to the paintings of Jean-Léon Gérôme.
Posted by billierosie at 09:34